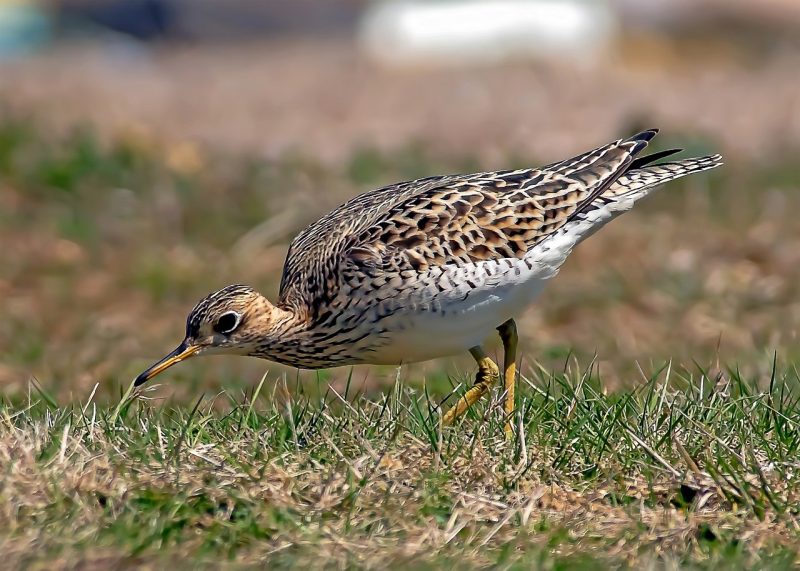 Indeed birds are always famous for their beautiful appearance and melodious song. They rise early and settle down at dusk and the dawn chorus is the first sign of morning. But, the question that why some birds chirp at night remains a mind-striking question? There are different reasons for that and varies from species to species. Some birds are famous for their late-night hootenannies and some croon by moonlight. Sometimes birds chirp at night because they are quite simply confused due to street lights and think that it is dusk when in fact it is the middle of the night. So, here is a list of the top 16 birds chirping at night.

Perching throughout the United States, Southern Canada, Mexico, and the Caribbean, the Northern mockingbird is one of the most familiar night singing birds. With a broad repertoire, it sings different tones, and notes in sequences, switching to a new tone frequently to show off its vocal prowess. Also, the Northern mockingbird is scientifically known as the “many-tongued Thrush” because of its mimicking ability and can produce an endless string of 10 or 15 different birds.

Belonging to the nightjar family, Eastern Whip-poor-will is a very famous night chirping bird. In fact, it has been much more easily heard than seen because of its highly camouflaged brindled plumage that blends perfectly with the grey-brown leaf. These are completely nocturnal birds that often stay quietly roosting during the day but at night are heard with a chanting song that rises to another end. It is interesting to note that Eastern Whip-poor-will forages at night especially at dusk and dawn and on moonlit nights.

One of the most beautiful birds of North America, the reddish-brown hermit thrush is very easy to hear and often sings very late in the evening or early in the morning. Hermit Thrush is a lovely and melancholic Bird that lurks in the understories of the Northern forest in summer. These are commonly found in wooded areas and often hop on the ground or skulk in dense patches of shrubbery.

One of the most common types of birds in Pennsylvania famous for the dawn chorus, the American Robin is a backyard bird of North America. American Robins basically chirp at night because of the streetlights that trick them into singing through the night.

American Robin is a migratory songbird named after the European Robin because of its reddish Orange breast(the two species not being closely related). These are fairly large songbirds with a round body, long legs, and long tails and are commonly found in open grassy areas, gardens, etc. It is also listed as one of the beautiful birds of Iowa.

Also Read: 10 Types Of Owls In The World

Commonly found throughout North and South America, Europe, Africa, and Asia, Black-crowned Night-Heron doesn’t have a musical song, but their raspy, croaking calls are commonly heard through the night. These birds are commonly found throughout a large part of the world except in the coldest regions. Also, Black-crowned Night-Heron open spend their days searching on tree limbs, and in the evening and at night they forage on mudflats and on land.

Common Nightingale is one of the most prolific songbirds of Europe, Asia, and Africa. It is slightly larger than Robin and well known for its lilting and beautiful song but surprisingly it is hard to spot. Blessed with more than 200 songs in its repertoire, the common nightingale is a very famously heard songbird who might sing them all at night.

Important to note that the common nightingale is relatively shy and often stays undercover in dense brush. But its melodious and mesmerizing flute-like voice and varied sounds can be heard from great distances and for long periods of time as this bird never gets tired of singing.

This brightly colored type of yellowbird, a warbler-like bird is always found hidden in thickets. When it wishes to sing, it ventures into a more open spot and thrills its listeners with its warbling chirps, whistling chatters, and raspy notes, all woven into a loud and easily heard song.

It offers a cascade of songs in the spring when males deliver a stream of whistles, cackles, chuckles, gurgles, and a bizarre series of hoots. Yellow-Breasted Chat is commonly found in areas of dense shrubbery, abandoned farmland, and other rural areas where overgrown vegetation proliferates.

Barred owls are one of the most common night chirping birds that have a mournful hooting call. They are the most commonly found owls in Florida, the eastern United States, Western Canada, and the Pacific Northwest. Barred owls are mottled brown and white overall with dark brown eyes and rounded heads with no ear tufts.

They have a distinctive hooting call of 8 to 9 notes. Throughout many cultural traditions, owls have been considered a symbol of bad luck ill health, or even death. The call of the owl is considered an unlucky omen and some believe that the hoot of an owl indicates the death of someone.

European Robin is a small songbird that often sings year-round. Also, it is one of the most familiar songbirds of North America. The major reason for Chirping this bird at night is the urban lighting that fools this bird into singing through the night.

Also, European Robins often sing early in the morning and late in the evening when not tricked by artificial lighting. These are commonly found in wooded habitats, gardens, hedges in farmland, and heathland. They are often seen as hoping perkily on the ground, flicking wings and Cocks tail.

Eurasian nightjar is an iconic bird found most commonly in Europe, North Africa, and Asia. Eurasian Nightjar mostly around dusk and dawn, and also sometimes overnight. The word “nightjar” actually refers to the male’s loud jarring or churring call that contains as many as 1,900 individual notes per minute. This nocturnal bird is a masterfully camouflaged songbird that is active at night and rarely seen by chance. These are migratory birds and prefer to stay in dry, open areas with some trees and small bushes, such as heaths, forest clearings, or newly planted woodland.

Killdeer is a wading bird mostly seen in the regions of the USA, Canada, and parts of Central and South America. It can grow upto 8 to 11 inches in length and 2.6 to 4.5 ounces in weight. Talking about the appearance, Killdeer has a brown back along with a white belly and orange-colored rump. The upper part of the breast has two black bands and white stripes on the wing. The bird species is an excellent swimmer and adults are capable of swimming on fast-flowing rivers and chicks over small streams. The varage lifespan of Killdeer is 10 years in the wild.

Black Rail scientifically known asLaterallus jamaicensis belongs to the family Rallidae. Talking about the apperance, it is a small bird that comes with a short bill. It can grow upto 10 to 15 cm in length and weighs around 29-39 gms. The total wingspan of black Rail is 8.7-11.0 inches. The overall body of the bird species is dark and there are speckles along the back and wings. The adult black Rail can be identified as red-eye that appears around 3 months of age. The avarage lifespan of black rail is approximately between 5 to 9 years.

The barn owl is a medium-sized owl and one of the most popular birds chirping at night seen across the globe except in the polar regions and deserts. It can grow upto 13 to 15 inches in length and weighs around 10 to 19.4 ounces. The female species are heavier than the males. Talking about the appearance, the species has a white face and grey to brownish head. The chest is white to yellowish-orange in color. Males are usually lighter than females. The varage lifespan of a barn owl is 5 to 10 years in the wild.

Common Loon is an aquatic bird that belongs to the family Gaviidae. The bird species were mostly seen in the regions of North America, Europe, and Asia. It can grow upto 2 to 3 feet in length and weighs around 6.5 to 12 pounds of weight. Talking about its appearance, the lion has a black head and neck. The overall body is covered with black and white plumage. During winter, the back looks dark grey, and the belly is white in color. Common Loon is a diurnal bird which means it is only active during the day. The avarage lifespan of the bird species is 15 to 30 years in the wild.

The Eastern Screech-Owl is a nocturnal bird and is famous as one of the popular birds chirping at night. The natural predators of owl species are raccoons, snakes, and the largest birds of prey, however, it preys on insects, earthworms, rodents, and tadpoles. It can grow upto 5.5-7 inches and weighs around 0.2 to 0.5 lb. It is very closely related to the Western screech owl, however, can be differentiated from the shade variations of the bill. As of now, 5 subspecies of easter screech owls are known to humans and distributed across the American continent. The avarage lifespan of the eastern Screech-Owl is 15 years in the wild.

Upland Sandpiper is a beautiful bird that belongs to the order Charadriiformes and the family Scolopacidae. The bird species is threatened and protected under the Migratory Bird Treaty Act to reduce their hunting fatalities. Upland Sandpiper loves to thrive in the region of grasslands and prairie grounds and is hence seen in North America, South America, northern Texas, Oklahoma, New Zealand, Alaska, and Australia.

Upland Sandpiper can grow upto 11.0-12.6 inches and wieght around 3.4-8.0 ounces. The total wingspan of the bird species is 18.5 inches. The young sandpiper is called a peep and primarily feeds on snails, earthworms, beetles, crickets, flies, spiders, ants, and grasshoppers. The avarage lifespan of Upland Sandpiper is up to 10 years.