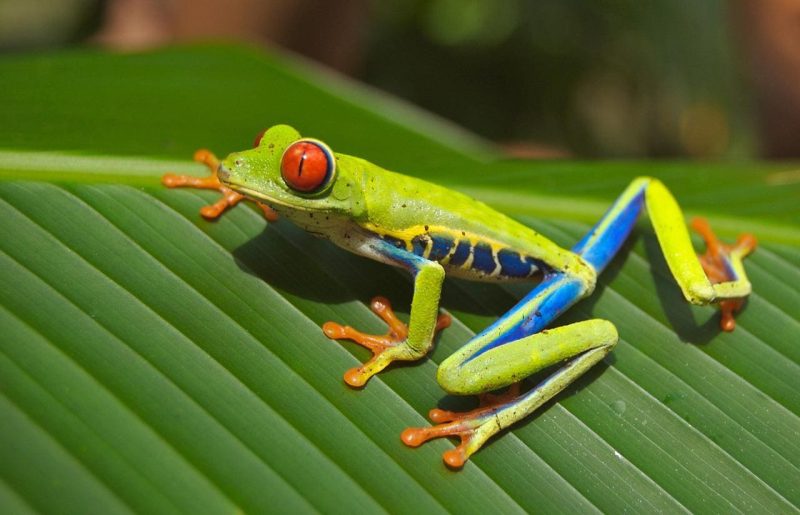 Green is the color of nature. Most of the plants are green in color which is imparted by the pigmentation of chlorophyll. Although green is ubiquitous in plants, not many green animals are there in nature. Some have evolved this green color to blend better with the leafage to avoid predators. While in others, it is the fashion of evolution, to become attractive to mates. Here’s a list of 10 green animals in the world.

Green Animals In The World

This boa lives in the rainforests of South America. The snake is emerald, green in color, and has some white stripes. The young ones of this species are not green but bright red or orange in color and turn their characteristic emerald green at about one year of age. These are not venomous and have a typical snake diet. Small frogs, lizards, birds, and rodents from the majority of its diet. They have a slow metabolism and therefore their hunting adventures are months apart. They grow up to a length of around 2 meters.

This species is also native to the tropical forests of Central America. This frog has beautiful multicolored skin with patterns and of course, big red eyes. There are blue stripes on its side and its wide feet are orange in color which stands in contrast to the blue color. This frog requires high humidity levels and optimum temperature. Their skin is very fragile and not suited to rough handling. People who keep them as pets have to keep this in mind. They are arboreal, meaning they mostly live on trees, which is also why their common name includes trees. Their sticky feet help them climb trees and jump between branches and leaves.

This wonderful moth is native to cold regions of North America. It is also sometimes called the Nearctic moth. These moths have an average wingspan of 4.5 inches but can go up to 7 inches in some specimens. The moths are bright green in color and but their wings have a thick dark brown or maroon front edge which stands in contrast to the rest of their body. Each of its wings has an eyespot and the hind wings are somewhat twisted. This is thought to deter the echolocation of bats which are main the predators of this species. The adult moths have only vestigial mouths and do not feed! They only live on the fat stores created when they were caterpillars.

This category includes many species but the majority of them are green. They are native to Amazon, of course, and can also be found in Central America and the Caribbean. These are noted for their ability to mimic sounds and are therefore popular as pets. Most Parrots have some spots of contrasting colors like red or blue, on their wings or crown which makes them even more attractive. The demand for these birds as pets has led to illegal trade and capture at a wide scale which has threatened the existence of some species in the wild. This cute little bird lives on trees in the wild and feeds on fruits, seeds, and nuts.

These beetles grow to a size of 3 cm in length. The most distinct feature is the glossy green color of the exoskeleton. To add to its beauty, the wings have parallel lines of shining silver or black eyes and a dark hue of blue. These beetles or scarabs are found at high elevation areas in the Southwestern states of the USA and northern regions of Mexico. They mainly live in juniper forests whose leaves they feed on. Perhaps that’s one of the reasons for the selection of the green color of this species, to blend with the leaves. What is interesting is that even though they don’t feed on flowers they still act as pollinators. How do you ask? Because they use flowers to hide and store food and for mating purposes.

These geckos are endemic to the North Island of New Zealand. While they are beautiful and very agile, they may not be suitable pets for everyone. First of all, they require an enclosure that has lively branches bamboo leaves and plenty of hiding spaces. Add to this their sun requirements. This is not affordable for everyone but few who do, not only have a beautiful gecko to show off but an enclosure that is like a miniature rainforest. They are day geckos, unlike many other geckos. Capturing any of these lizards is not an easy task given their agility and the fact that they hide at the slightest hint of danger.

These are mollusks that live in shallow saltwater near the Japanese Ryukyu Islands. These small creatures are an evolutionary marvel. The first noticeable feature that makes them distinct from other slugs is the absence of any shell or covering. Next is the leaf like outgrowths on its body. The sheep leaf sea slugs feed on algae. What is interesting is that they do a process by which they retain the chloroplasts of the algae and then perform photosynthesis themselves! They have two long stalks that act as their nose on their heads which appears like a sheep’s ears and that is why it’s named so. They are very small creatures, barely measuring a centimeter in length.

This peacock can be found in the tropical jungles of Southeast Asia. They have beautiful glossy green feathers all over their body and have one of the best animal patterns in the world. Like the Indian peacock, the males of this species too put up a beautiful show of tail feathers to attract the females but in this species, the males molt the tail feathers outside of the mating season and so distinguishing males from females can be hard. In modern times poaching and habitat destruction has put this bird in the endangered category on the IUCN list. It is one of the most popular birds in the world.

This is the common mantis that is found in Africa. The insect is totally green in color with a hue that matches foliage. They measure about 2.8 inches in length. The rear part of the body is remarkably similar to a leaf and its leg joints which are brownish in color, look like wood. These are aggressive predators of smaller insects. Humans have nothing to be afraid of this insect as they neither bite nor sting nor do they carry any venom. It is one of the most beautiful green animals in the world.

These are big turtles that live in the warm waters of the Pacific Ocean. They do not appear green entirely, rather the name refers to the fat stores that are green in color. Unlike most other turtles and true to their name they eat green. Literally, they feed on seagrasses and do not eat other animals. Due to the loss of nesting sites, being damaged by fishing nets and garbage in the ocean harms the turtle population and now they are listed as endangered species. Sea turtles have become the icon of sea conservation projects across the world.