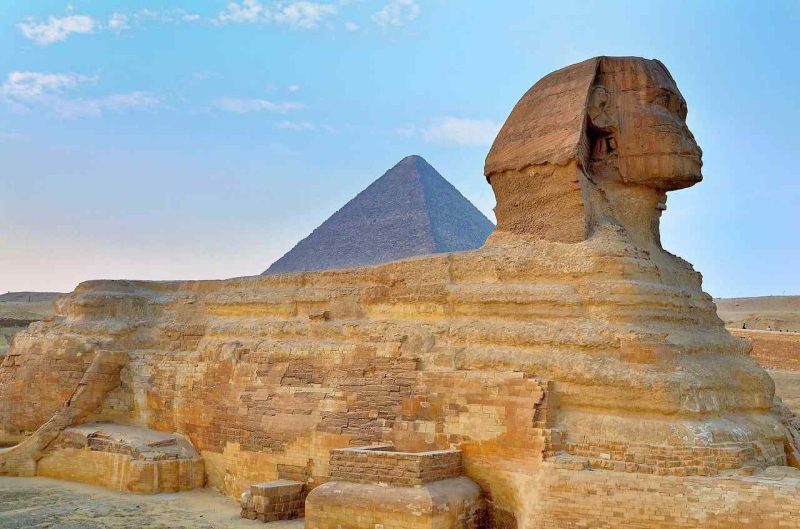 Egypt has had a long lineage of impressive rulers, each of whom left a tangible impression of their reign on their kingdom through commissioning an impressive range of works – statues, temples, tombs, etc. These works are the epitome of sound engineering and architectural skill, as some of these works remain standing, even today after nearly three millennia. Here is a list of the most famous monuments of Ancient Egypt that stood the test of time, and became the country’s most buzzworthy tourist attractions,

1. The Great Pyramids of Giza

Mentioned amongst the wonders of the world, the Great Pyramids consist of a three pyramid complex. These pyramids were built by Egyptian Pharaohs Khufu, Khafre and Menkaure in descending order, and stood 139 m, 136m and 65 m tall respectively. The complex was completed by 2150 BCE. The Pyramid of Khufu is known as the “Great Pyramid”, which used approximately 2 million blocks of stone during its long two-decade period of construction.

2. The Great Sphinx of Giza

The Sphinx was a mythical figure at the centre of the lives of the ancient Egyptians, as the source of the food cycle. Another lore states that the statue of the lion-bodied human-faced was installed near the Great Pyramids of Giza, to be the protector of the Great Pharaohs, even in their afterlife. It is widely believed that the period of construction of this statue coincided with Khafre’s reign in 2500 BCE. Carved out of a single rock, the statue is a marvellous show of skill manship at 73 m long, 20 m high and 6m wide. Over time this mighty structure has eroded significantly.

Located on the western bank of the Nile River, the Valley of the Kings consists of 63 tombs and 120 chambers of the Pharaohs and people of prominence, in the new Egyptian kingdom. One can see detailed adaptations of Egyptian folklore and mythology on the wall art adorning these tombs. They also boast a variety of hieroglyphs and graffiti. This site is considered to be a fountain of historical knowledge. The most prominent of the sites of the valley is King Tutankhamen’s tomb, which not only had a well-preserved mummy of the ruler. But also boasted of lots of gold artefacts, and other precious items.

Relocated to the western bank of Lake Nasser when an artificial water reservoir was built in the 1960s was built in order to preserve and protect it from possible submersion, Abu Simbel is an ancient site of two rock-cut temples. The Pharaoh Ramses the Second granted the mountainside temples patronage, in his name as well as in that of his wife Nefertari’s name. These temples have some great carvings of the rulers as well as of Egyptian mythology, engraved on them.

The Luxor Temple refers to a large temple complex, situated near the Nile River. It has much historical significance as it was the site of multiple coronations, and was dedicated to the Egyptian gods Amun, Mut and Chons. Constructed in 1400 BCE, these temples were made only out of sandstones. It is also famous for the ancient Egypt Opet Festival. The advanced architectural planning and engineering of the time are evident in the way the airflow is maintained perfectly within the complex.

The site of the ancient Karnak Temple is in Luxor, on the banks of the Nile river. After its initial construction began around 2000 BCE, several generations of Egyptian Pharaohs kept on improvising on it, thus making it one of the largest sites of religious importance in the world. Within the structure, the Temple dedicated to Amun-Ra has often been mentioned as the absolutely must-see site.

Another site located in Luxor, the Colossi of Memnon is comprised of two larger than life statues depicting the Egyptian Pharaoh Amenhotep the Third of the Eighteenth Dynasty. These statues are made of Quartzite sandstone and stand 75 ft tall. These statues weigh 75 tonnes. These statues depict two Pharoah sitting with their hands or their knees, acting as guards to the mortuary temple.

Located in Saqqara, the Pyramid of Djoser is the first pyramid built by the Ancient Egyptians. Constructed in the 27th century BCE, this is a 62.5 m tall, step Pyramid made of limestone. This Pyramid was not constructed as a tomb only for the Pharaoh, rather it was meant for the entire royal family, with granite burial chambers with tunnels about six km in length.

One of the popular monuments of Ancient Egypt, Djeser-Djeseru, more commonly known as the Temple of Hatshepsut, was commissioned by the Pharaoh Maatkare Hatshepsut and is dedicated to Amun. This temple lies on the bank of the Nile in Deir el-Bahari. The temple was also built with the intention of worshipping the ruler (Hatshepsut) along with the god, hence its name. The unconventional style of this temple (unlike other typical Egyptian architecture), especially in its representation of the Pharaohs of Egypt is often credited to the fact that this temple was built under the female Pharoah Hatshepsut.

The Bent Pyramid was built in 2600 BCE by Pharoah Sneferu of the old Egyptian kingdom. It has a distinct and iconic double slope on the walls of the Pyramid. At a height of 104 m, it is the fourth highest pyramid in the world. When constructed the outer walls of the pyramid were made of Tura limestone. Later, after the layer of limestone was taken for construction in Cairo, the red limestone used on the inside of the structure became visible, thus giving it the moniker of the ‘Red Pyramid’. The unique shape of the Pyramid has made it an irresistible tourist attraction for many years.

These are the 10 most famous monuments of Ancient Egypt. Kindly share and do post y our comments.