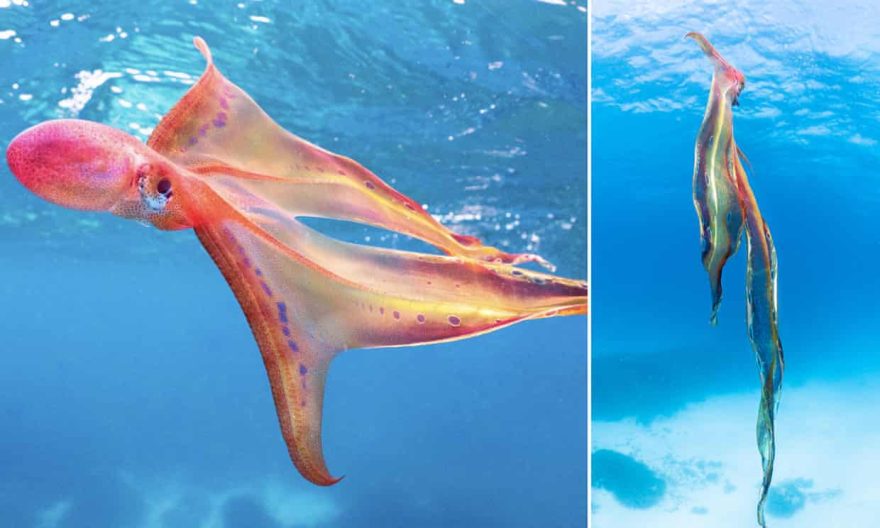 Extremely rare blanket octopus spotted in Great Barrier Reef. A video showing an extremely rare blanket octopus has gone viral on social media. The marine mollusc was spotted last week by reef guide and marine biologist Jacinta Shackleton, off the coast of Lady Elliot Island in the Great Barrier Reef. “When I first saw it, I thought it could have been a juvenile fish with long fins,” Shackleton said.

The technicolour marine mollusc was spotted last week by reef guide and marine biologist Jacinta Shackleton, off the coast of Lady Elliot Island in the Great Barrier Reef. “When I first saw it, I thought it could have been a juvenile fish with long fins, but as it came closer, I realised it was a female blanket octopus and I had this overwhelming sense of joy and excitement,” she said. Please click on the Instagram logo for the video,

“I kept yelling through my snorkel, ‘it’s a blanket octopus!’ I was so excited I was finding it difficult to hold my breath to dive down and video it.”
Blanket octopuses are extremely rare. The first sighting of a live male was made 21 years ago just north of the Great Barrier Reef in the Ribbon Reefs by Dr Julian Finn, a senior curator of marine invertebrates at Museums Victoria, and colleagues.

In the New Zealand Journal of Marine and Freshwater Research, he noted they are the “most extreme example of sexual size-dimorphism in a non-microscopic animal”. While females grow up to 2 metres in length, the males have only been seen to grow to about 2.4cm long.

Males also don’t develop the blanket octopus’s iridescent “blanket” that makes the species so alluring. For the females that do develop it, the display can be shed to elude predators. The extreme difference between the sexes is thought to have developed because of the blanket octopus’s unique habit of carrying blue-bottle stingers for self-defence.

Shackleton said she believes there have only been three sightings of the octopus in the area before hers. It generally spends its lifecycle in the open ocean so it’s even more unusual to see one on the reef. Shackleton said she feels lucky to have been in the water at the right time to capture the vision of the spectacular species. This is not Shackleton’s first extraordinary sighting. She has also encountered a rare ornate eagle ray and a rare melanistic manta ray but says the blanket octopus “has got to be one of my all-time favourite reef experiences”.

“Seeing one in real life is indescribable, I was so captivated by its movements, it was as if it was dancing through the water with a flowing cape. The vibrant colours are just so incredible, you can’t take your eyes off it. “I’ve truly never seen anything like it before and don’t think I ever will again in my life.”