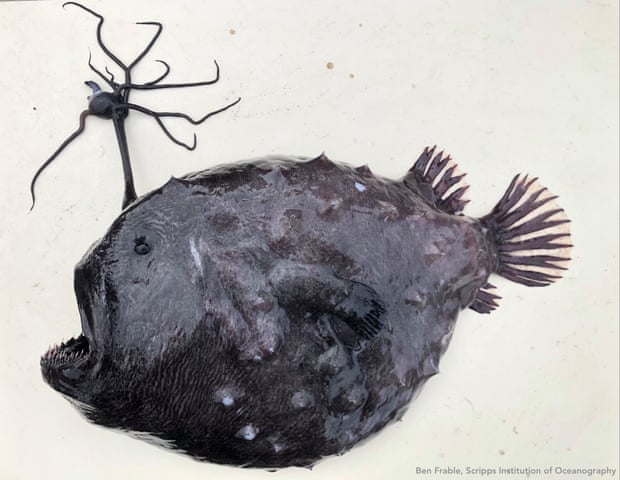 A Pacific footballfish, one of the largest species of anglerfish, washed ashore near Encinitas last Friday. Lifeguards notified scientists about the unique deep-sea creature and Scripps scientist Ben was able to collect it for research and preservation.

Talking about the appearance, The pacific football fish comes with spiny teeth and a bulb on its head and this is the third wash ashore this year. Initially, it was spotted between rocks along the shores of San Diego this week was mistaken for a ball of tar, however, later it became clear that this was something special.

One of the finned creatures had a gaping underbite that revealed nightmarish spiny teeth, small black eyes, a tentacle-covered appendage and a bulb protruding from its head.

According to the University of California San Diego’s Scripps Institution of Oceanography swiftly identified it as a Pacific football fish, a deep-sea dweller so rare that only 31 specimens have been found in more than a century since it was first discovered. The Pacific footballfish is the third to wash ashore in California this year, a highly unusual event given its extreme reclusiveness.

Ben Frable, an ichthyologist and the Collection Manager of Fishes at Scripps Institution of Oceanography who is examining and preserving the fish said in the statement, that this was an indication that something was amiss. If that was the case, he said, there would be many more. But the two that were recovered this year (a third was photographed on the beach but disappeared before scientists got to the scene) are already offering the chance of new insights about the species.

The Pacific footballfish is one of the 100 species of anglerfish found around the world. Scientists know they typically dwell thousands of feet beneath the surface and lure unsuspecting prey into their mouths with the help of the flashy bioluminescent bulbs that dangle from their heads. They are covered in spikes and their sharp teeth are not used to chomp but to trap other fish, squid, and crustaceans that dwell in depths of up to 3,300ft, according to the California Academy of Sciences. This description is only for females.

The males have evolved to become little more than sexual parasites that fuse themselves to their mates, losing all their internal organs – including their eyes – in the process. Connected forever, the male retains only his testes to provide sperm in exchange for food.

The other recently acquired Pacific footballfish, which was discovered in Orange county’s Crystal Cove in May, has already expanded scientists’ understanding of the species. It was also on display for several months this year at the Natural History Museum in Los Angeles, which enabled members of the public to catch a glimpse of the unusual creature. William Ludt, the assistant curator of the ichthyology collection at the Natural History Museum, said the exhibit fueled excitement about the find.

“There’s a lot we don’t know about this species in general,” he said. “It is exactly the type of thing we want to put on display so people can see it and learn about the world around them and about the strange creatures that are in their own backyard.”

That’s also why it is so important that anyone who encounters an animal on the beach alerts officials who can get it into the right hands. Each one has the potential to provide a piece of a puzzle scientists are trying to solve. “Each one of these that comes up is a treasure trove of information,” Ludt said. As we approach the end of the year in India, we have a small favour to ask. We’d like to thank you for putting your