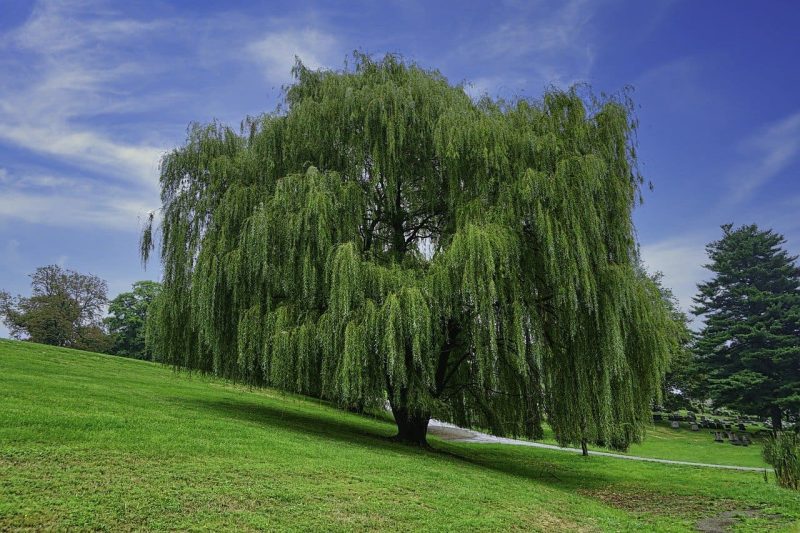 Willows are common trees found in most parts of the North Hemisphere. It is commonly known as osiers or swallows. Willows are generally big trees that are known to grow rapidly. They have an extensive root network and require large amounts of water. As such, they are the choice of plants for flood-prone areas. Not only do they help in absorbing the water it also protects the land from erosion. The native region of Willows goes far up north, where the genus shows only low growing shrubs. The following is the list of the 10 types of willow trees in the world,

A popular choice of the plant near water gardens and commercial gardens in general, because of its visual appeal. The tree has bright coloured leaves varying from pink to green and even white in accordance with seasons. In winter the stem and barks turn red giving another eye candy for visitors when all the other trees have become leafless and boring. The tree is found naturally in Eastern Asian countries. Its leaves are elongated like most willow trees. The plant sometimes grows up to the height of a regular tree although more often than not it can be considered a shrub.

It is a familiar tree in the Americas. It was the tree of choice for many Native Americans for various purposes from making baskets to making houses. Its medicinal properties were also well acknowledged among them. In modern times it has become an endangered species in many parts of America. It is grown in Horticulture in America and abroad too. It is also known as coyote willow commonly. In springtime, its leaves get covered with fine hair-like fibers with silvery color and silky texture. The plant grows readily from vegetative propagation and is not too hard to maintain.

Also Read: 10 Types Of Palm Trees In The World

This tree originally grew in North-western China but spread to many parts of the world through the silk road. The tree is not too big, going only up to 25 metres in height. These trees are known for their rapid growth. The most distinguishing feature is the hanging leaves from long stalks. The leaves have a light green hue and change to yellow in the Autumn season transforming the scenery. A look at one of the bigger trees of this species when it’s in the full form will show you why it is called weeping willow. The plant grows rapidly around 3 – 4 feet in a year and is generally found in places near water sources like riverbanks or streams and ponds.

This willow is native to the Mediterranean region. So Western Asia, Europe and Northern Africa would be its natural home. As the name suggests the plant has a distinct purple colour. But not just its flowers, the branches also have purple pigmentation. The willow can survive some dry seasons and hot sun typical of the Mediterranean. Its leaves have a glossy green colour and a bluish hue on the lower side. This makes the plant a favourite for indoor decors and photoshoots. The willow has been used for ages for purposes like basket making and making medicines. It is also used as a fence to prevent soil erosion from wind.

Or Japanese Pussy Willow. Like the Japanese cherry trees, this is an ornamental plant that shows remarkable beauty. The catkins or pods become light pink in colour just before the spring season. Like nature is decorating plants to welcome the joy of spring. In later spring the pods turn silvery white which although not so joyful is still rather pleasing. It is commonly used in decoration in festivals in the East. The plant prefers moist soil and a sunny environment.

The white willow is found natively in Europe and adjoining regions of Asia. The leaves are long, like other willow trees but the distinguishing feature is the almost white colour of the underside which gives the tree its name. Scientifically, it’s called Salix alba and it’s grown in many horticulture for its uses. The tree is found in wet regions like the edges of lakes or ponds as it requires huge amounts of water. Like most of the plants, this too is rather short-lived. The catkins that carry seeds are spread through the wind because of the small flowers that make them fluffy.

It is a smaller willow species that is native to arctic and alpine regions. Unlike most of the willow species, instead of long elongated leaves, it has round leaves. It does not rise much above the ground but spreads wide. The catkins of this willow are light red and yellow in colour that reaches their full beauty in spring. It is a pleasant sight among rocks on sides of roads and in gardens. This shrub is literally beauty in a small packet. It is a perfect choice for small gardens and homes.

This willow shrub grows in cold deserts. Its native region is roughly the regions around the North Pole. It grows wide like grass and its little patch of green is a sight that pleases many in a land where nothing survives. You can guess from the name, that the plant is adapted to tundra climate. This arctic shrub may seem trivial to us humans but is the primary source of food for tundra wildlife. Without it, the food chain will collapse even endangering animals like the polar bear.

This species covers all of Europe and many parts of Asia. The tree has multiple main stems and does not reach great heights. The Almond describes the general shape of the leaves. The tree finds use in the biofuel industry and crafts like furniture and baskets. Its catkins are green in colour and bloom in spring much like other willows. It is one of the best types of willow trees in the world.

Scouler’s Willow is found in the northwestern part of the continent of North America. It is considered an invasive species in the region. This species has an advantage over the other willow plants and trees in that it can survive in relatively harsh conditions. It can survive dry conditions better than most other willows that grow only in moist soils.

The fruit is reddish in colour and its flowers are white when they bloom in the spring. The wood is generally not hard enough for building purposes or making furniture. However, it is still widely used by people for firewood and for its medicinal value. It also forms a major component of the fauna of the region.

These are the 10 different types of willow trees in the world. Kindly share and do post your comments.