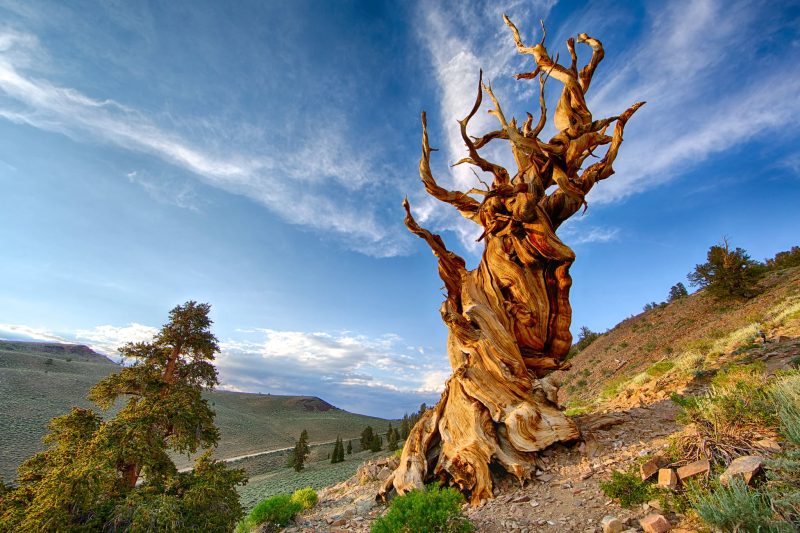 We don’t generally think about plants when we think about old living things. But plants outlive, and by a huge margin, any other living thing in the world. They are a living witness to thousands of years of history. Some of them have even witnessed the time of Romans! Read on to find out about some of the oldest trees in the world.

Oldest Trees In The World

Prometheus was even older than the second member of this list, Methuselah when it was alive. The tree was situated in Wheeler Park in Nevada in an area with many other old trees. A scientist who was doing research related to the age of trees was given permission to chop down the tree by the Forest Department and so it was cut; cut to see how old it was! We found its age, but we lost the age-old tree.

The Prometheus was a bristlecone pine and stood against nature for almost 5000 years. The region does not provide good nutrition and the climate gets extreme many times a year. These trees survive hailstorms, droughts, freezing winds, and heat and thus are extremely resilient which is reflected in their bodies.

Also Read: 10 Types Of Palm Trees In The World

Methuselah is named after the biblical character who lived for almost 1000 years. Not an apt comparison, however, because not only does this tree predate the bible itself, it does so by more than two thousand years. And it’s still living! It belongs to the Pinus longaeva species, also known as Great Basin bristlecone pine. Located in eastern California, the Methuselah grove is a protected area, part of a protected National Forest. Its location is kept secret to protect it from a fate similar to the Prometheus.

Also Read: What is Biodiversity and Why it is Important

It is a, well, yew tree located in a village in North Wales. Belonging to the Taxus baccata species, the tree is situated in the yard of a church in the village. The tree has no central trunk and is split into several large offshoots. Earlier the church used the space in between the large offshoots for an oil tank. However, on realizing how ancient it was, the tank was removed saving it from any mishap that could have destroyed it. The tree is alive to date and is a part of British national heritage.

A cypress tree is located in central Iran in the Yazd province. The stories around the tree say that its sapling was planted by the prophet of Zoroastrianism, Zoroaster himself, while on a journey to spread his message. The tree, as it should be, is a protected natural monument. The tree belongs to the Mediterranean cypress species and is 25 metres tall, and its trunk broadens upwards as its branches. It can be said that this is the longest living thing in all of Asia and it continues to live.

This tree was found in Turkey near the Black Sea region. The area surrounding the tree is a natural monument meant to preserve the tree. It belongs to the Taxus baccata species also called the common yew. Although it has not been dated exactly, we have an estimated date that takes it back to around 2000 BC. It is indeed one of the oldest trees in the world.

Gran Abuelo in Spanish means ‘great-grandfather’. A suitable title for an old man and a tree maybe. This tree and its family are the main features of the Alerce Costero National Park. The Gran Abuelo is a Fitzroya tree which when translated in Spanish gives the name of the park i.e., ‘Alerce’. Found in Chile, this tree is higher than 60 meters and has a stem diameter of 4 meters.

The National Park was created to help preserve these thousand-year-old trees. At the time of the inquisition, the Spaniards, and later Europeans and Chileans burnt a large number of these trees for various reasons and the species has become endangered, requiring protection. It is speculated that there once were many more trees, going even backward in time that was cut earlier.

This tree in Florida, USA used to be the biggest bald cypress tree in the States. The earlier inhabitants of Florida, the native Americans used this tree as a landmark for various purposes. It was 50 metres in height before a hurricane destroyed the top in 1925. After surviving for more than three thousand years, the tree could not outlive human selfishness. It was burned down in a fire accident caused by people smoking inside it. The tree turned to ashes along with the history that it carried with itself. A clone of the tree is now planted in the park where it stood. The new tree is perfectly named, ‘the Phoenix’.

The giant sequoia trees are famous for their physique. One of the world’s tallest tree is also a giant sequoia making it one of the biggest things in the world. This is a different one however and is uninterestingly called ‘CBR26’, perhaps because of the fact that it’s dead. It belongs to the Sequoiadendron giganteum species and is found in its natural habitat in California. This entire species, unfortunately, is threatened by wildfires. It may be yet another casualty of climate change if wildfires in the state keep ruining forests every year.

Belonging to the Adansonia digitata species, it is found in the savannahs of Africa. These trees are distinctly identifiable by their unusually thick trunk. This tree died in 2011 and here again, scientists believe, climate change was the reason. The region lies in sub-Saharan Africa and the trees survive a hot dry climate which is becoming worse with climate change. Some trees that have died were reported to have trunks as wide as a bus!

One of the oldest trees in the world comes from the sequoia family, like others, this one is a giant too. In fact, is said to be the third-largest. It is also found in California. It was named after Warren Harding, the President of the US. Neighbouring trees are named in a similar fashion as congress, house and senate. The tree towers to a height of 75 meters above the ground.

Located in Sri Lanka, this is a fig tree that holds great cultural and historical importance. It is historically known that it was sent by the Emperor Ashoka of India, with his daughter when he sent Buddhist messengers around the world. The tree is grown from the original tree under which the Buddha himself attained enlightenment. The king of Sri Lanka himself planted the tree in Anuradhapura in 300 BC. It is the oldest tree that is artificially planted and has a known date of planting.