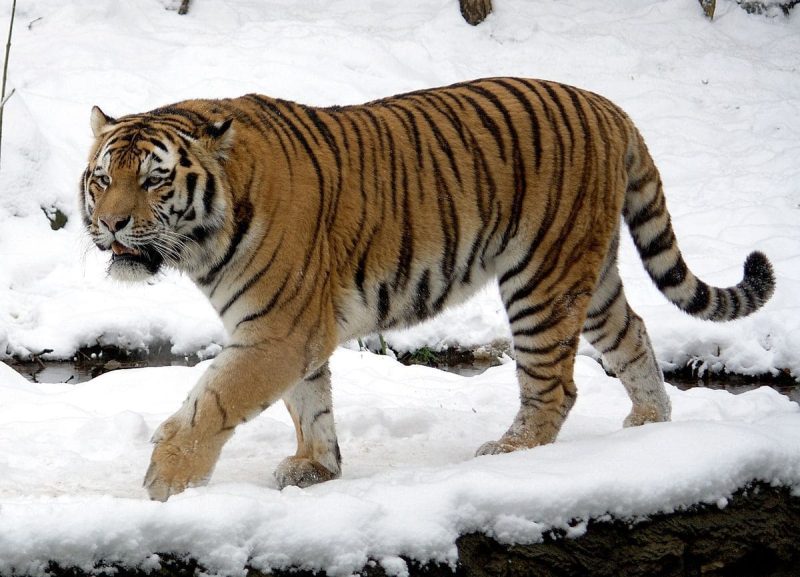 Tigers are majestic animals found in large parts of Asia. Orange with black striped these animals were hunted recklessly throughout the 19th and 20th centuries which led to their categorization as endangered species. Apart from hunting for pleasure, smuggling and infrastructure development were other major reasons for the sharp reduction in their population. We have lost a few species in spite of conservation efforts in many countries however, fortunately, some of them. Read on to find out about 10 types of tigers found in the world.

This species of big cat was originally discovered in modern Turkey and the region surrounding the Caspian Sea with some of the members going as far as Afghanistan and Xinjiang in western China. They were declared extinct in 2003. They are resembling closely their cousins the Siberian tigers. The central distinction points of this species of tigers were its bright fur and narrower stripes than their relatives, the Siberian tigers. This species was noted for its size. Some specimens were so big that were put on display in museums. These big prey cats have also been a part of local folklore in Central Asia since ancient times and often feature in many historical paintings too.

The Javan tiger used to live in, well, Java, Indonesia. Being limited by geography and the type of animals that they feed on; these big cats were relatively smaller as compared to their counterparts in mainland Asia. The main distinguishing feature was its longer and narrower stripes. These cats went extinct in the twentieth century due to excessive hunting by local people and human development. The people were so afraid of this beast that a Dutch author recorded that the Javan people don’t talk about them without referring to them as ‘mister’ for fear that the beast might take revenge on them.

Native to the island of Bali in Indonesia, this tiger too faced extinction in the twentieth century. Earlier biologists had classified it as different species owing to its brighter fur and smaller size. This group when alive was smaller in size than any of the Sunda islands tigers. Later after more detailed studies, it was recognized in the same group as Panthera tigris sondaica. From whatever evidence was gathered their prey was found mainly to be native bovine animals like the Javan Rusa.

Thankfully they are not yet extinct but still, they are still listed in the critically endangered category of IUCN. These tigers are the only members of the big family that comprised the tigers of Sunda islands, that are alive today. The male specimens are noted to have a prominent ruff which is a distinguishing feature. The coat pattern is also different from mainland Asian tigers. Its coat is of a darker hue, and they generally have broader stripes. They prefer to inhabit dense jungles and don’t prefer low-lying plains, plantations, and forest edges. This tiger too was revised and put in the same group i.e. P.t. sondaica by biological experts recently.

Also Read: Top 10 Most Graceful Animals In The World

This tiger is found in Indochina or Southeast Asian countries. The main distinction points with its neighboring Bengal tiger is its darker fur coloration and numerous stripes. Most of these tigers reside along the western border of Myanmar (Burma) and preserved forest lands that are spread out all across Thailand. Their prey comprises fauna like sambar deer, which is native species, banteng, gaur (Indian Bison). Some of them also prey on smaller Asian elephant calves.

Originating from the Malayan Peninsula, they are present in the critically endangered category of IUCN. Fewer than 300 members of this family are left today which once spread throughout the lush green jungles of Malay islands. Called harimau in the native Malay language, the technical name jacksoni derives from the British conservationist Peter Jackson. The Malayan tigers do not differ from the Indochinese tigers or Bengal tigers except for some minor details.

The main point of difference from the neighboring species is the difference in the shape of a skull. Physiologically speaking, their coat is brighter and somewhat yellowish. Their numbers underwent a sharp decline during the latter half of the 20th century. The problem of expanding agriculture, deforestation, and declining prey animals compounded the problem so much that no recorded member exists in wild today. The great leap forward campaign also targeted tigers causing a significant reduction in numbers.

Bengal Tiger is often recognized as charismatic megafauna. It is used as a symbol for environmental preservation movements. This majestic animal is recognized as the national animal of both India and Bangladesh. It comes as no surprise that almost 70% of these elegant beasts live in India alone. It even started on the ancient seals found in the Indus valley civilization that dates back to 2000 BC signifying its importance in the culture. In a 2008 census, these tigers numbered 1,411. Due to the conservation efforts of several governments,s however, this number is now up at 2,967 as per a 2018 report.

Historically these types of tigers were larger than any other tiger from any group, but the present tigers in this group are lighter as compared to Bengal Tigers. Some years ago only about 380 of them were left alive. The later numbers, however, are encouraging, with the population going up to 562 wild Siberian Tigers. They have acquired different names in different regions: like the Ussurian tiger or Amur tiger, where the name derives from the river basin they inhabit.

Also called the bleached tiger, it isn’t a distinct species, but a variant of the Bengal and Siberian tiger’s hybrids. They frequently steal the limelight in exotic animals shows and zoos. The distinct color of the coat is not because of fur but because of skin pigmentation. Meaning that even a shaved tiger would look the same with the same skin color and stripes. It is one of the most beautiful types of tigers in the world and is also listed as one of the most amazing black and white animals in the world.