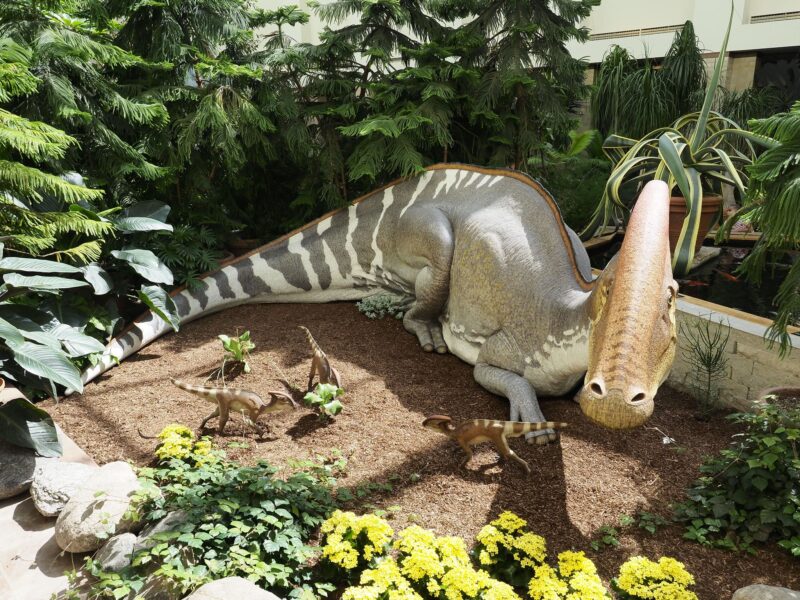 Ever since the discovery of these creatures, human imagination has created all sorts of creatures from them. Not just movies, but stories and novels have been written about them. It’s almost like we knew about them from the beginning. This however is not the case. When the early people saw the fossils and bones, they did not think of dinosaurs but saw them as dragons and demons and monsters. With the discovery of newer fossils and the development of scientific methods, we know more about dinosaurs than ever. Read on to find out about 10 different types of dinosaurs in the world,

Types Of Dinosaurs In The World

Popularised by movies like Jurassic Park, this is probably the most widely known and feared dinosaur. Also called T-Rex, this dinosaur although not the biggest but definitely the heaviest predator of their time. The word ‘Rex’ in the name comes from Latin which means King. The estimated time period of their existence is around 67 million years before the present.

While it’s culturally portrayed as an active and ferocious hunter, some scientists claim that they were actually scavengers or perhaps both a hunter and scavengers. Their fossils were excavated in western regions of North America.

These dinosaurs too existed in North America and in approximately the same age as the T Rex, about 67 million years ago. As the name suggests these dinosaurs had three horns on their skull. Unlike T Rexs however, these were herbivores. Their body length is about 9 m and their weight is about 12 metric tons. It is speculated that small triceratopses were prey animals of T Rex.

So, the battle between them, that Hollywood shows is perhaps not entirely a work of fiction. The structure of their skeleton suggests that their evolution is similar to that of modern rhinos. The purpose of these horns is thought to be for attracting mates and power display rather than for fighting.

These small dinosaurs’ fossils were uncovered in Central Asia dating back to 75 million years ago. Unlike what Jurassic Park and the Jurassic World showed us, they were rather small. Similar to a turkey in size and somewhat in appearance too, with two legs and a feathered body, and a long tail. Unlike turkey, however, that had two clawed hind feet too. Many excavations in Mongolia have turned up fossils of these dinosaurs which has given this much data about them.

These dinosaurs had big plate-like growths on their spines that protruded outward. They existed in the US where their fossils have been uncovered. The approximated era of these dinosaurs is considered 155 million years ago. These were huge beasts. They had small heads for their bodies and a long tail which they held upright in the air.

Like T Rex and many other dinosaurs, their hindlimbs were longer than their forelimbs. Among the stegosaurus family, not all had the spine bones in the shape of plates, some even had long spikes instead. Although they were herbivores, they wouldn’t have been easy to mess with for bigger dinosaurs.

Their fossils have been dug from sites in Northern Africa. The most notable feature is their spine. It had skeletal plates all along the spine and that is the justification for its name too. Spinosaurus actively hunted in the environment that which it lived. A big predator with body length going up to 18 meters and probably 20 metric tons in weight, comparable to other big predators like T Rex.

For comparison, the blue whales reach a length only three or four meters longer than this. Scientists say that they lived near water and ate terrestrial and aquatic animals. Their feet are also thought to be webbed, adapted for swimming. If they swam the sail on the back would look somewhat like a shark fin.

Another common name includes the German name Urvogel. They are known to be the predecessor of today’s birds. Unlike the images that come to your mind from Hollywood movies, these animals were not that big. Their body lengths were rather short, at only 0.5 meters. A few larger archaeopteryx are thought to be comparable to only modern ravens in size. Many of their fossils were uncovered in Germany and the nearby regions in Europe. At that time Europe was only a group of islands surrounded by warm waters.

One of the different types of dinosaurs in the world, The brachiosauruses used to live in vast regions of the world like America and Africa. They were unusually big herbivores as has been popularised in movies. They had necks that were long like a giraffe’s and unlike many other dinosaurs, their forelimbs were bigger than their hindlimbs. The movie Jurassic Park has accurately depicted them as huge friendly dinosaurs that mind their own business and stick to a plant-based diet.

The remains of these dinosaurs date back to approximately 193 million years ago. Their skeletons were found in Arizona in the US. It predates the T Rex by a huge margin and was one of the biggest early predators. The feature that makes them distinctly identifiable is their head. They had two semi-circular disc-like bones between the eyes. These ‘crests’ are what have given it the name ‘diplopia’ from Greek. They probably weren’t very long, going only up to 7 meters in length and 400 kg in weight.

Also Read: 16 Largest Birds Of The World By Body Weight

This is one of the armored dinosaurs from 67 million years ago. Its back was covered by thick bony plates that acted like armor. The dimensions were not very big, its length was 7 meters, and weighed 7 metric tons. Its head lay low and had four horns. The body shape can be thought similar to a porcupine, but with bigger legs and neck. Some ankylosauruses even had spikes on the armor edge near the belly. This animal is nothing less than nature’s tank. It is one of the most amazing different types of dinosaurs in the world.

Parasaurolophus are easily distinguishable by their heads. The two long tube-like bones protruding outwards are not easy to overlook. There might have been a tissue between these bones and the purpose of these bones is speculated as thermoregulation or for communication or perhaps even adornments for courtship. They are thought to be somewhere near 9 meters in length and 2.5 tons in weight. But the lack of a complete skeleton possesses a challenge to the accurate determination of its body structure.

These are the 10 different types of dinosaurs in the world. Kindly share and do post your comments.