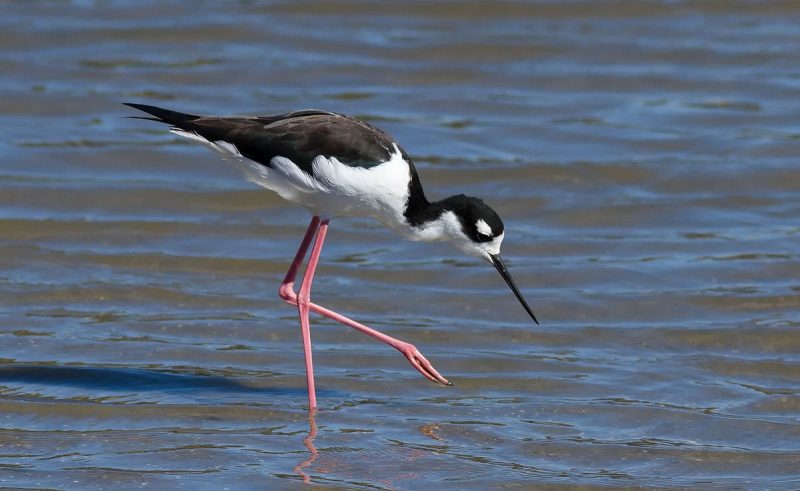 Our planet Earth is home to countless bird species possessing different colors, attractive patterns, amazing feeding habits, mesmerizing habitats,s, and distribution. Also, Birds are one of the prettiest creations of Mother Nature and have always remained an eye-catching creature. Their vibrant colors mesmerize everyone and capture their attention towards this amazing species of the animal kingdom. So here is a list of the top 16 black and white birds of the world,

Also known as the American magpie, the Black-billed Magpie is a large black and white bird with having a long tail and a Bold pattern especially visible during flight. Also, it is a songbird of North America and among one of the few North American birds that build a domed nest. Black-billed Magpie is native to Western America and also found in Canada, Mexico, Arizona etc. Also, they are found in a variety of habitats like rangeland, conifers, streamsides, forest edges, farms and most commonly in groves of trees in open terrains.

Pied Bushchats are small passerine bird species most commonly found in open habitats of tropical and subtropical Asia ranging from West Asia and Central Asia to the Indian subcontinent and South-East Asia. It is a small bird with a dumpy structure. Males are generally black with a white vent and white wing patch why females are dark brown with the reddish-brown rump. Also, this majestic bird species is well recognised through its wide range with many island forms. Moreover, it is a social bird commonly found perching in open scrub or grassland at the top of short on trees looking for insect prey and also feed on Pyralid moths and whitefly.

White hawk is a spectacular, broad-winged, short-tailed bird of prey found commonly in lowland tropical forests but is widely spread in the tropical new world. Seen commonly soaring in the mid-late morning and perching quietly in the forest canopy, it is a new tropical species found only in the Americas. It has long and broad wings with white head, body and black upper wings. Also, it has yellow legs and a black bill. This bird of prey feeds mainly on reptiles and also insects and mammals.

Pied Avocet is a large black and white wader bird species with elegantly shaped, boldly pied plumage and long bluish grey legs with long slender upcurved bills. It is a migratory bird species, found commonly in coastal wetlands and brackish lagoons and estuaries and also near large lakes. Also, it feeds on a variety of aquatic invertebrates such as insects, larvae, worms, fish and plant materials. Moreover, they breathe in temperate Europe and West and Central Asia and in winter migrate to Africa or Southern Asia.

The black-headed ibis is also a wading bird species and one of the largest waterbird species in the south and southeast Asia. It has a white body and bare black head and neck. Also, it has a down-curved beak and black legs. However, both males and females look identical and have greyish tail feathers. Also, this species is widely spread across India, Sri Lanka, Nepal and Myanmar. Black-headed ibis for ages in a range of natural and man-made habitats including freshwater and saltwater marshes, lakes and ponds, rice fields, irrigation canals etc.

Indian Paradise Flycatcher is one of the passerine black and white birds mainly native to Asia particularly to the Indian subcontinent, Central Asia and Myanmar. It is a medium-sized bird with a graceful body. It has a glossy head with a black crown and crest. Also, males have elongated Central tail feathers while females are short-tailed. They are most commonly found in thick forests and well-wooded habitats. However, these are noisy birds uttering sharp screen calls.

Also Read: Top 10 Water Birds in the World(Pictures And Info)

White-browed wagtail is a medium-sized Bird having a blackhead, back and upper tail with white underparts Endemic to the Indian subcontinent, this majestic bird species is about the size of a bulbul found commonly on the south of the Himalayas. However, they are not found on higher elevations and inhabits open freshwater and wetland habitats. It is interesting to note that it is one of the few wagtails that has adapted well to urban habitats. Also, it is a passerine bird species mainly singing long and loud songs with many different notes.

Oriental Magpie Robin is a small passerine bird the distinctive black and white feathers and a long tail held upright. Also, males have glossy blue-black upper parts, head, throat and upperparts while females have grey upperparts. Moreover, This distinctive black and white bird species is the national bird of Bangladesh. It is commonly found searching in open Woodland, cultivated areas and other in open areas such as mangroves, gardens etc.

The American coot is popularly a plump, chicken-like bird species possessing a rounded head and a sloping bill, short wings and a tiny tail. Also, they have dark grey feathers with a white patch under the tail. American coots are tough but adaptable water Birds found commonly in shallows of freshwater lakes, ponds, marshes etc. It is native to the Northern United States and Southern Canada. Also, it is a migratory bird, that heads towards the southern United States during the winter season. Furthermore, they make a wide variety of noises like grunting and clucking to attract attention and communicate with their mates.

Also Read:10 Types Of Yellow Birds (With Pictures And Info)

The white-breasted nuthatch scientifically known as Sitta carolinensis belongs to the nuthatch family Sittidae. The medium size bid species can grow upto 15.5 cm (6.1 in) in length. Talking about their appearance, they are gray-blue on the back along with a frosty white face and underparts. The lower belly and under the tail are chestnut. The avarage lifespan of the bird species is two years in the wild, howvever, the maximum recorded growth is twelve years and nine months.

The black phoebe is scientifically known as sayornis nigricans mostly seen in the regions of Central America, North America, and South America. The bird species prey on insects and small fish. It can grow upto 6.3 in (16 cm) in length with an avarage wieght of 0.5 to 0.8 oz (15 to 22 gms). One of the beautiful black and white birds in the world loves to thrive in coastal areas and river valleys. The black phoebe is a small flycatcher bird with an avarage lifespan of 10 years in the wild.

The black skimmer is scientifically known as Rynchops niger is mostly seen in North and South America. It is also known as seadog, scissor-bill, and cutwater and is known to be active throughout the day but is mainly active during dawn and dusk. The unique fact about black skimmers is that they spend maximum time near the water but did not swim into it. The avarage lifespan of the bird species is unknown but the maximum recorded age is 20 years in the wild.

The black-necked stilt scientifically known as Himantopus mexicanus and belongs to the backward curved beak family of birds Recurvirostridae. Talking about their appearance, they have darker colored dorsal feathers along with a long neck and straight black bill. The male species can be identified with glossy black feathers and a white spot above each eye, however, the female species can be identified with dark and brown dorsal feathers. The avarage lifespan of the bird species is 5 years in the wild.

The royal tern is scientifically known as Thalasseus Maximus mostly seen in the regions of Caribbean islands, Brazil, the south Atlantic coast, and the coasts of America. It can grow upto 18 to 20 inches (45–50 cm) and its avarage wieght is 12 to 16 oz (350–450 gms). The bird species prey on small fish like minnows, sardines, anchovies, shrimps, and crabs. The natural predators are hunting and trapping. It is one of the most beautiful black and white birds that come with a gray and white body along with bright orange bills and black legs.

So, this is all about the amazing black and white birds of the world distributed across the globe and attracting everyone with their varied behavior