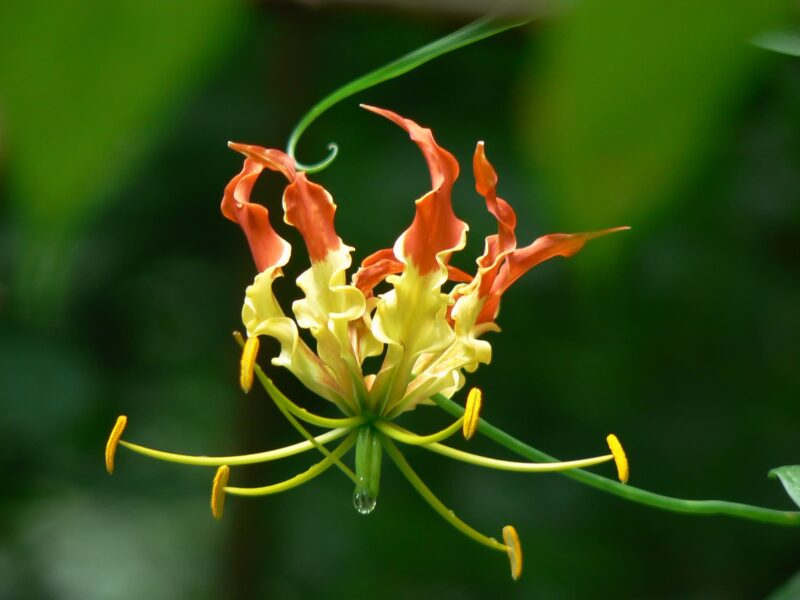 Africa is a massive continent with huge diversity in people and nature both. There are many beautiful plants and animals to be found here. This is true for flowers too, Africa has not only beautiful ones but some unique ones too. Here we have compiled a list of 10 African flowers. Read on to find out more about them.

African flowers in the world

The commonly used name of this flower is crane flower or isigude in Nguni, the language of the region where it is native. The native region is South Africa, and it grows naturally as well in floriculture. Another name for the flower is ‘bird of paradise’ because if you look closely the flower looks like the head of these marvelous birds.

They are categorized as allergy-fighting as they do not release pollen into the air. The cultivars have adopted two most loved colors yellow and orange. The flowers can be found in the market mostly in these two colors. The sheath from which the flower grows also acts as a resting place for pollinator birds who perch on it.

Also Read: 10 Different Types Of Sunflowers In The World

This flower grows on a tall tree, whose name is the same as the name of the flower. The common name is the African tulip tree. The non-uniqueness of this name suggests how common this tree is. In fact, this tree is also named among the worst invasive species.

The flowers are flaming red in color. When young, the flower is like a bag of sap. Birds are often found feeding on these flowers. When in blossom, the flower is cup-shaped which again holds, dew or rainwater. Due to these reasons, this tree is a haven for many bird species.

This is a unique flower that has been given multiple names by different cultures wherever it grew. Common names include flame lily, glory lily, tiger claw, and Agni Shikha which means flame head. When in full bloom, the flower resembles fire and that’s why these names are justified. The overall shape of the flower is weird. It is like a flower that has been turned upside down and its petals turned upwards like an umbrella in strong winds.

The base of the petals is yellow colored which again is similar to the yellow color of the flame. The stamens are long and spread downwards like the arms of a quadcopter. True to its name, the plant’s nature is fire too. Every part of the plant is poisonous. The toxins are strong enough to cause a painful death to humans and animals alike.

These are big flowers from Africa. They are mainly found in South Africa and are commonly called the king protea. They have evolved to the wildfires are affect the dry region where they grow. There is a thick stem with multiple unopened buds that grows underground. This is responsible for the fresh growth of the flower even after a fire has ravaged the land above. The flower has a center that is prominently visible. The flower is made of several flowers in turn. They mainly sport white, pink or green color or some combination of them.

This is an evergreen plant that is found in Southern African countries like South Africa(obviously), Mozambique, and Zimbabwe. The common name is krantz aloe. This is a succulent plant like aloe vera with these beautiful and distinctive flowers. The flowers grow on long stalks that grow well above the plant. Multiple flowers spread out from the top of the stalk forming a sort of cone.

The flowers, themselves are small and reddish-orange in color. They are cylindrical in shape and many of them form the arrangement that forms the bright colored cone-like a flower. It is grown for the succulent leaves in horticulture, and it is also a source of nutrition for insects and birds who feed on the nectar.

This plant is also commonly called African Daisy. This beautiful flower has been grown in multiple cultivars each with a beautiful feature. The color of the flower can be yellow-orange or red or even white and pink. They are actually composite flowers meaning they are made of multiple smaller flowers, with each flower being part of one of the petals or the stamens. Some varieties have been developed by hybridizing with other flowers that are popular in florist shops.

This one is also called the Pineapple flower. This flower is endemic to South Africa. The color of the petals varies from white to purple and the shades in between. The plant on which it grows is a small evergreen one. The flowers are small with six petals, pale in color with purple stamens. The flowers grow from a common stalk which has a pineapple-like leaf head at the top. The flowers are also arranged in a sort of pineapple-like fashion.

This flower grows near water. The flower consists of a single broad white spathe. A spathe is just a leaf modified that looks more like a petal of a flower but is actually not one. The base is a little yellow in color. In the center grows a long cylindrical spadix that bears the actual small flowers.

This is one of the African flowers which is both unique and beautiful. This flower is beak-shaped and most brightly colored. The shape of the flower resembles a parrot. As this flower grows in tropical forests, it may even be dismissed as a small parrot under the leaves.

The flower is bright red colored at the end and has yellow color at the neck where it connects to the stalk. The common name also refers to the parrot-like appearance of the flower, the Congo cockatoo. The variety common in horticulture and that is grown in Europe and America is called African Princess.

Also Read: Top 10 Most Beautiful Flowers In The World

Another marvelous flower from the natural bounty of Africa. The common name of the flower is kloof pincushion because it looks very much like a pincushion. The flower is made of several hundred styles that emerge from the center. They have a broad end and are curved inwards to form a dome-like shape. It is one of the most beautiful African flowers in the world.

Unfortunately, this plant is listed in the endangered species category because of the declining population due to habitat loss. This species is endemic to Western Cape, which does not have a large floral population to further increasing the danger. So, any adverse event may cause the plant to go entirely extinct.

These are the different African flowers in the world. Kindly share and do post y our comments.