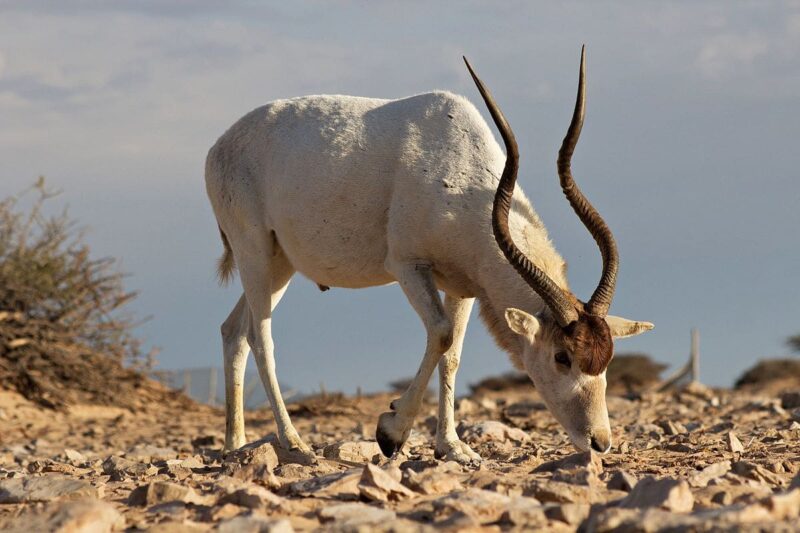 How many animals do know that have horns? Apart from cattle, do they even exist? Yes, there are plenty of animals with horns. In Africa itself there are many animals. Read on to find out about 10 African horned animals in the world,

The technical name of the species is Capra Nubian. This is goat species found in the desert regions of Egypt and Northern Africa. The horns are extensively grown and quite stunning. The bodies are brown or some shade of it, closely resembling the color of the landscape. The horns grow up to lengths of about 1m! However, females have much shorter horns. The horns are shaped like a sword, curved backward.

They mainly feed on small shrubs and grasses that grow in these climate zones. They are preyed upon by big cats in this habitat. This mainly includes leopards and some wolves, foxes and big eagles, and vultures. They are social animals, where most of the herds consist of females and young ones. The males often live solitary or in temporary groups. The horns are a formidable defense of these otherwise easy targets for animals of prey.

Also called the white antelope or the screwhorn antelope. Both of these names give away prominent features of these animals. The fur is white-colored or pale-colored. The coat changes its color depending on the season but generally remains off-white all throughout the year. The horns are well, shaped like a screw thread.

These antelopes are adapted to arid regions and are mostly found in the southern Sahara. They eat grasses and bushes and have adapted to the lack of water. Therefore, they can go for many days without water. At present, they are listed as critically endangered by IUCN due to unregulated hunting.

Scientifically called the oryx damage, this is an antelope found in the arid regions of North Africa. Rather, they ‘were’ found in North Africa because as of now, they are declared extinct in wild. They have a white-colored coat all over the body except the neck. The neck and chest are covered in a red-brown coat.

The horns are quite long and scimitar-shaped. They have adapted quite well to this arid region as they do not need to drink water for months or even years! They derive most of the moisture from their food which consists of succulent plants and grasses. They have been human culture since ancient times. The Romans bred them on ranches for their skin and horns. So did the Egyptians, who even offered them to gods.

These are big antelopes that inhabit the sub-Saharan region of Africa. The scientific name of this animal is Taurotragus derbianus. The horns are straight and with a helical pattern again, like threads on a screw. The body length is close to 3 meters and weight varies in the range of 400 to 1200 kg.

Their coat is reddish in color. One distinguishing feature is the thin white color stripes on the back. These are vertical, like a zebra’s, but very thin and number only 12 to 15. In fact, the number of stripes is also one point of distinction between the two subspecies. A dewlap, which looks like a layer of loose skin hangs from the neck downwards.

Scientifically called the Hippotragus niger, this is an antelope found in the East African regions. The coat is generally dark brown to black in black with lighter underparts, often white. The face also has white vertical stripes near the eyes. This white color stands in stark contrast to the dark coat and gives it an amazing appearance. They are residents of the grasslands called the savanna.

They live in groups of 10-30 individuals. The group is led by an adult bull. The horns are curved backward like a scimitar. They use their horns in fights among themselves as well as against predators. There have been instances when the mighty lions prove no match for the sheer strength of Antelopes and have even died!

Also referred to as gemsbuck or South African oryx, this animal is found in Southern Africa. In particular, they are found in the dry regions of the Kalahari Desert. These handsome antelopes have long horns that are on average 85 cm long. These majestic horns are straight with circular textures. Coming to the coat, that is absolutely wonderful. The face has a black and white pattern.

The back and neck have a brownish soil-colored coat. The legs are white in the lower half and black in the upper half. Looking like a gentleman with white boots. The mane, which extends from the head, down the neck is also the same color as the coat but the top of the hairs is black colored, which forms a black stripe stretching from the head, across the back to the tail hairs.

Well, though most animals on this list are from the antelope family, this one’s for a change. This is a chameleon from the jungles of East Africa. A chameleon with horns! The skin color is bright green which matches the color of the vegetation. But we don’t guarantee that you’ll find them in this color for obvious reasons.

The typical length of a male chameleon is about 38 cm. The most important feature is the three horns on the face. Two short ones above each eye and one long one on the nose. Due to this unique feature, they are quite popular as pets among chameleon lovers.

This antelope is found in vast regions of Africa, spreading across the wet and humid East Africa to the dry and arid regions of the Kalahari Desert in South Africa. The main features of this animal are the wide ears and the long horns that are spiral-shaped, like a strand of DNA. One other prominent feature is the thin white stripes on the back which run vertically downward. Another identifying point is the white stripe that joins both eyes.

One of the animals that are most known for their horns is the rhinoceros. They have a thick hide like most rhinos and two horns on their face. The longer one on the front and the shorter one behind it. The technical name of the animal is Diceros bicornis. They are found in South Africa mainly as they have gone extinct in the Central and Sub-Saharan regions of Africa.

One of the African horned animals, scientifically called the Tragelaphus angasii, is an antelope found in South Africa. The most distinctive feature is the yellow color of the legs found in the males of the species. The color is bright and clean which looks unnatural like it has been painted on the animal. The horns are long and spiral-shaped. The color of the coat is dark black or brown in males and a slightly paler shade in females. They also have a stripe of light-colored hair along the spine going from the head to the tail.

These are the most amazing African horned animals in the world. Kindly share and do post your comments.