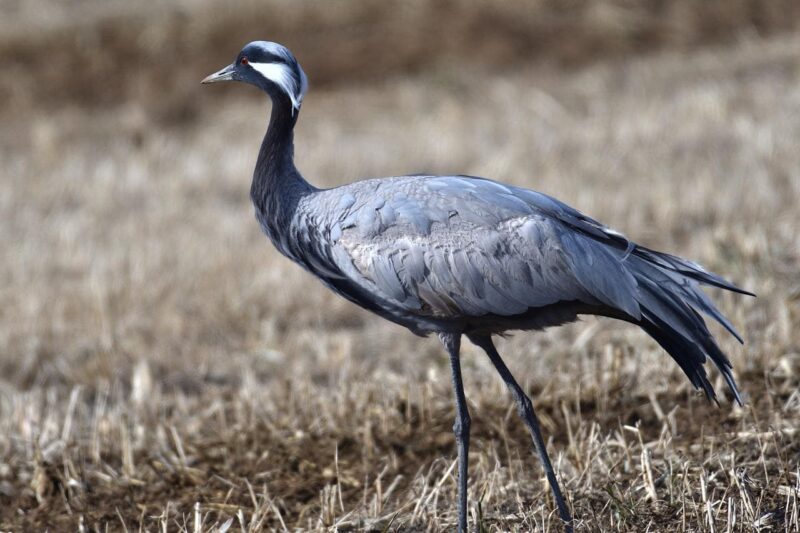 Did you see a marvelous grey bird recently and want to find out about it? Or are you wondering if there are any grey-colored birds? Well birds come in a lot of colors and surely there are plenty of grey birds for you to see. We have taken care to include some exotic birds here and ones that are mostly grey so much so that many have the word ‘grey’ in the name itself. Read on to find out about 10 grey birds in the world.

Grey Birds In The World

As the name tells these types of parrots are found in Africa. More specifically, they inhabit the rainforest regions of Africa. They have mostly grey plumage all over their bodies except for the white face and underparts. Another striking feature is the presence of bright red tail feathers. The colors stand in great contrast to each other. But this parrot does not only boast its looks.

They are known to be highly intelligent creatures. Like other parrots, they too can imitate sounds. But they also develop a library of hundreds of sounds of different wild animals that they then use to their advantage in the wild. Several experiments done on the species prove that they have great levels of cognition abilities.

This is a medium-sized bird. These swallows are mainly found in Australia and surrounding regions like Fiji, New Guinea, and the Philippines. They live and nest on trees. They have grey heads and wing feathers. As per the name, they have white breasts and underparts.

They are social birds and are often seen in flocks, sometimes even as big as 100 birds. The diet consists of insects mainly that they find on the trees. They also catch insects in flight and sometimes walk on the ground to fill their stomachs. They are also able of feeding on nectars from flowers.

These are common birds that are found in cold mountainous regions of North America. The grey-colored Juncos, have head breast, and wings feather colored. Some color variations are observed from individual to individual. Some females have a slight sandy shade on the flanks. They have small heads and fluffy bodies which almost makes them look like a ball.

They are found throughout the Indian subcontinent. The main noticeable feature is the horn on the bill obviously. They have a mostly grey body with lighter shaded feathers on the underparts. The bill is white-tipped and black behind it which is also the color of the horn. The breeding behavior is peculiar in some aspects. They do not build nests but rather live in tree hollows.

When the female is about to lay eggs it seals the opening of the hollow leaving only a small hole. The male provides support to the mother bird and young chicks when they hatch in form of dry grass and food. They are known to feed on many different kinds of fruits native to India including some that are toxic to other animals.

The scientific name of the species is Ardea cinera and they are tall water birds. They have long white necks and grey plumage on the body below including the wings. They can be found in large parts of the world where they reside or are migrating to, or are breeding. This covers Europe, and Africa except for the Sahara region and all the coasts of Asia.

An important feature is the streak of black feathers just above the eye, which gives it an awesome hair look. They mostly stay close to water bodies where they can easily find prey, which consists of fish, insects, small animals, birds whatever they can find. This places at the top of the food chain in such ecosystems.

This too is a big African bird that is at top of the food chain among birds in its habitat. The appearance of a secretary bird is strikingly beautiful. It has very elegant colors and body features. Add to that the body movements and you’ll why it’s called ‘secretary bird’. They have mostly light grey feathers on the face and neck and wings.

The edges of the wings have a black stripe that extends to the tail. It has long legs that are half covered in black feathers. They are only found in African grasslands and due to climate change and habitat degradation, they are listed in the endangered category.

On hearing the scientific name, Balaeniceps rex, and seeing an image of this bird for the first time one might easily call it a dodo and declare it one of the extinct species. But that would be far from the truth as they are very alive and are not dodos.

The bodies are mostly covered in feathers of different shades of grey. They have long legs and are similar to cranes in appearance. Except that instead of long beaks like cranes they have totally different beak designs. They have an interesting shoe-shaped bill that is brownish in color.

Another marvelous creature of flight from Africa. Their plumage is unlike any other bird. The first thing to notice is the golden feathers on the head in the shape of a crown, giving it the name ‘golden crested crane’. They have white-tipped beaks, with white cheeks and black face and redhead and neck pouch.

The long necks have elaborated long feathers like the hairs of beautiful women. The back and wing feathers are also grey in color while the underparts are light grey to white in color. When they fluff the grey feathers near the shoulders and tuck in the neck it looks like the luxurious fur coat of a wealthy person.

These grey types of owls are found in cold regions near the arctic circle. The plumage is extensive as with most owls and has brown feathers mixed with the grey ones. They have yellow eyes and grey feathered circles around both of them.

They are excellent birds of prey with a remarkable sense of hearing. Because of their nocturnal habits, they have to rely on sound for hunting. They can hear small animals move even beneath the snow and can dive into the snow as pelicans do in water to grab their prey.

An elegant tall bird with elegant feathers. They have dark grey feathers on the lower neck that end in a hair-like fashion. The Wings are light grey to white in color and so are the legs. The head and face are also dark greys in color, but they have a white streak going backward from the eye.

They are very significant in Indian Culture where they are inculcated in the thousand-year-old kinds of literature. Their habitat includes the Indian subcontinent and regions to the north of it as far as the Arctic circle.