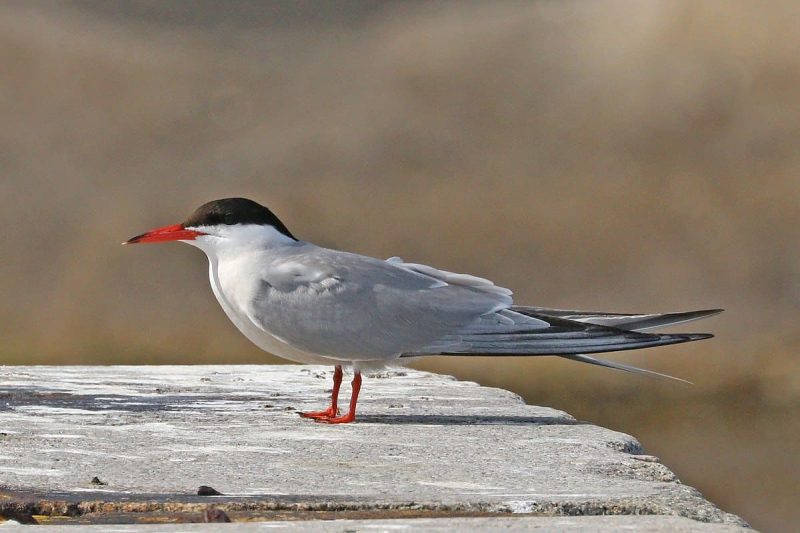 When one envisions a beautiful sunset, one does so by picturing a giant orange-red illuminating ball slowly floating down a hilltop, and what makes it beautiful is the array of wings flapping around the outline of the hill, cruising their way through the horizon. These aviators of nature come in varying shapes, colors, and sizes filling the canvas of our blue-green globe. Saying so let’s jump in to learn about 15 birds with red beaks.

Native to shallow wetlands and estuaries in the southern United States. This red-billed spectacle moves through the water with its bright red legs and its curved red bill probes the muddy surface below. They nest in colonies in trees and shrubs along the water’s edge, changing locations every year. One can witness large white and dark wading birds by visiting the coastal wetlands in the southeast at any time of the year. What makes this bird stand out is its reddish-pink legs and red bills. Also, moving around in large groups in shallow wetlands or flooded fields to find foraging birds.

Also Read: Top 10 Birds That Are Blue In Colour With Pictures

If the word flamboyancy had to be depicted with a bird of Iowa then the Northern Cardinal fits right in. In fact, it has been so well-loved that it has been named the official bird of no less than 7 states in the United States. Even the most casual bird in Pennsylvania admirers could easily identify one due to their bright red appearance and are often seen in backyards and bird feeders. These birds do not migrate and are more common in warmer climates such as the US southeast. Only the males sport the bright red appearance which is the key to mating success.

The strident laughing calls of this gull are among the most characteristic sounds around tidewater along the Atlantic and Gulf coasts, especially in summer. It seems to be mostly a warm-tropical kind of bird with the majority departing from Atlantic coastal areas north of Florida in winter. Its nesting colonies are localized but often large, sometimes with thousands of nests. Contrary to its outlook, the “jester” themed gull is quite the outlaw as it steals food from the brown pelicans by landing on the pelican’s head and snatching fish from a larger bird’s bill pouch.

Also Read: Top 10 Birds with Red on Head With Pictures

Visually appealing is what comes to one’s mind when one gazes upon this bird found in freshwater marshes and wetlands of the southern United States. It’s safe to say that the purple gallinule is one of the most brightly colored birds in the United States. Body of metallic purple green resembling a peacock, long bright yellow legs and huge feet, and a bright red beak with a yellow tip. They are quite the swimmers and those feet allow them to easily climb and perch in bushes and trees. Their nests can be seen on top of floating vegetation, or in more protected reeds.

If happiness came flying in small packages we’d call them hummingbirds. These broad-billed hummingbirds are considered small even for hummingbirds. Males are bright green with a bluish throat and chest, and a bright red bill with a black tip. They are mainly found in Mexico, but sometimes cross the border into New Mexico and Arizona. They can be attracted using nectar feeders and native flowers such as honeysuckle and agave. In courting the female, the male makes a precision flight display linked to a hypnotist’s swinging pocket watch.

Being the largest tern in the world, the Caspian tern looks very similar to common terns, the main difference being their tails are less forked, their beaks are thicker with a deep coral red color, and they are much larger. Found in the southernmost shores of North America, while during breeding season they are found in Canada and the US in small pockets. The largest breeding colony in the world, of approximately 6000 pairs is found on an island on the Columbia River between Oregon and Washington. Although these birds might appear calm on the outside they are extremely defensive when it comes to their nests and will attack other birds or people that come too close.

Some birds just catch your eye in their own ways, some from their beauty and some through behavior both strange and interesting, which brings us to the black skimmer. Not only is the skimmer’s beak bright red and black but it also has an odd shape to it. The upper bill is significantly shorter than the lower which helps the bird to skim through the surface of the water with the longer lower part of their bill to catch fish by feel. What one might see as a flaw has been utilized exceptionally by the bird, and because they can feed this way, they can find their prey by feeling making it possible to feed at night too. Skimmers are the only species in the entire world that fish in this manner.

One of the birds with red beaks found along the rocky Pacific coast, the black oystercatcher has a darker body plumage which is thought to be an adaptation to better blend into the dark rocks found along North America’s western shores. Their range stretches from Alaska all the way down to the Baja coast. Usually nesting on islands the oystercatcher use rocks on the shoreline to make a bowl-shaped nest by flicking rocks with their beaks to build the right shapes.

With a name like that one might expect this majestic and popular bird to be in any way related to a woodpecker or something similar, and to an extent, it is, as they are cavity nesters and like to nest in trees. These pulchritudinous waterfowl are the only North American duck to lay two sets of eggs per year. They are rare to find and readily accept an appropriately sized nest if provided. The males have their heads crested in a downward slope, with red eyes and partially red bills whereas the females are much more muted in tans and browns with small blue wing patches and brown beaks.

These birds can be seen in a lot of spaces where they create a calmer aesthetic sense to the place such as golf courses, agricultural fields, and shallow ponds. They are quite the noisy bunch when in flocks and have a commanding presence in Texas and Louisiana. The origin of their name comes from the fact that these birds are more musical sounding than other birds with higher-pitched whistling and squeaking rather than the gruff “quack” of the usual duck.

The buff-bellied hummingbird scientifically known as Amazilia yucatanensis is a medium-sized hummingbird that can grow upto 10 to 11 cm in length with an avarage wieght of 4 to 5 gms. Talking about their apperance, the upper body is metallic olive green and buffy in the lower breast, however, the tail and the primary wings are rufous in color. The beak is red in color and primarily feeds on nectar from flowers and flowering trees with the help of a long tongue and can catch insects on the wing.

The common merganser is also known as goosander is a seaduck that usually thrives in rivers and lakes in the regions of Europe, Asia, and North America. The bird species primarily feeds on fish and nests in the holes of trees. The primary diet is mostly fish and also seen eating mussels, shrimp, salamanders, rarely plant material. The oldest common merganser recorded was 13 years 5 months old, however, the avarage lifespan is recorded as around 12 years 6 months for males and 13 years 10 months for females.

The red-breasted merganser scientifically known as Mergus serrator is a diving duck that was described by Carl Linnaeus in his landmark in the year 1758 where it was given the binomial name Mergus serrator. The adult species can grow upto 51 to 62 cm in length and with a total wingspan of 70 to 86 cm. The varage wieght of the bird species ranges from 28.2 to 47.6 oz. The red-breasted merganser primarily feeds on small fish and aquatic insects, crustaceans, and even frogs.

The common tern is one of the amazing birds with red beaks and can be easily identified in open oceans, beaches, and big lakes. The bird species primarily feeds on fish and one of the most common natural predators is red foxes. It is seen in the regions of Europe, North America, South America, and New York. The North American bird belongs to the Aves class. The avarage wieght of the common terns is 3.3 to 7 oz. The avarage lifespan of the bird species is 9 to 12 years in the wild.

These are the top 15 birds with red beaks. Kindly hare and do post your comments.