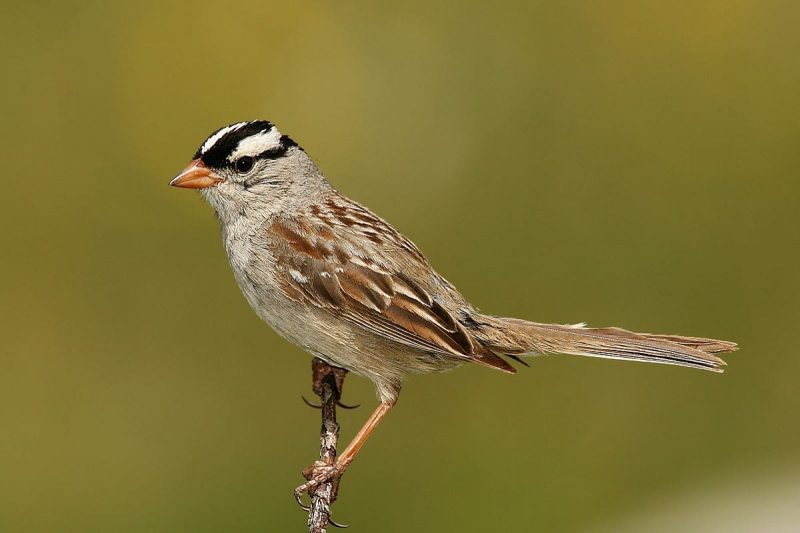 You might have noticed many brown birds around you. These small creatures are so unique that you can spend your entire day looking at them. Most of them belong to the sparrow family; however, there are some which may not belong to the same despite their colour. Here is a list of some brown birds,

Belonging to the family of New World Sparrow, the winter sparrow or the American tree sparrow is a small bird. Its maximum growth is up to the length of 14 cm and its wings stretch up to 24 cm. This bird is very sensitive to cold water. Their average weight varies between 13g-28g. They relish eating seeds, insects, and surprisingly berries. They hover around the tundra or the northern limits of the boreal forest in Alaska and even northern Canada. Their unique quality is that they make their nest on the ground.

This bird is mostly found in certain regions of the United States, Canada, and Mexico. It is a state bird of South Carolina and is also listed as one of the small birds with small beaks. They enjoy wandering over-dense forests, farm edges, and suburban areas. It is generally 12.5cm to 14cm long and has a wingspan of 29cm. Its average weight is around 18-23g. Their average lifespan is around 9 years. Carolina Wren is the second largest after the Cactus Wren in the United States. Initially, it was named Sylvia Ludoviciana in 1790 by John Latham. They feed on insects, caterpillars, beetles, true bugs, and many others.

Edward Forbush in 1929 said that the Chipping Sparrow “the little brown-capped pensioner of the dooryard and lawn, that comes about farmhouse doors to glean crumbs shaken from the tablecloth by thrifty housewives.” It is a passerine bird and belongs to the category of Passerellidae. This new world sparrow is very common across the American range. Its average height ranges between 12-15cm and a normal chipping sparrow weigh around 11-16g.

With a total wingspan of 21cm, they thrive in the shrubs and low trees. The nestlings are fed by both the parents and the new ones leave the nest only after 8-10 hatching. Do you know how they got their name? It came from the sharp ‘chip’ like the sound they make while interacting with their fellows. If we talk about their lifespan, till now the oldest recorded Chipping Sparrow was at least 10 years, 11 months old.

It is a small songbird that belongs to the finch family, known as Fringillidae. It has a red peaked head and a brown body. The male finches are rosy in colour with a bright red crown on their head. The female finches are mostly brown and white in colour and you will find dark streaks on their chest and underparts.

With a total wingspan ranging between 25-27 cm, it can grow up to 16cm. Its average weight ranges between 24-34g. Their habitat is found in North America, the mountains of western North America, northern New Mexico, and Arizona. The name of this bird comes from the curator at the Philadelphia Academy of Natural Sciences, John Cassin. This is of the famous birds that have red on the head. Their diet includes seeds, berries, and insects.

The small birds of Iowa belong to the genus Molothrus and the family Icteridae. The male cowbirds are larger in size than the females. The former ones can grow up to 19-22cm; whereas the latter can grow up to 16-20cm. They have thick heads and short tails. There is an interesting fact about them, the female cowbirds do not make a nest of their own. They lay their eggs in the nests of other bird species. They are the ones who take care of the newborns. Interesting! Isn’t it.

Here is another bird from the wren family. One of the popular Missouri birds is mostly found in the regions of Canada and South America. With a wingspan of 15cm, it can grow up to 11-13cm in length. The weight of these birds varies between 10-12g. They generally rest inside the tree holes or the nest boxes. Interestingly, the male wren sings to defend his territory. Talking about their lifespan, the oldest wren recorded was 9 years old.

This bird is mostly found in farms or lightly wooded residential areas. With a chestnut cap and white cheeks, it looks very different from all the other sparrows. Its uniqueness lies in the black patch on their white cheeks. Can you believe the North-American Eurasian sparrows have descended from just 12 sparrows? And because they were separated from the Eurasian population, they differ from those in size and certain other features. The oldest recorded Eurasian Tree Sparrow in North America was around 4 years old.

It is the largest sparrow in North America. It has a black crown on its head. It has a black crown, grey cheeks and a clear white belly. You can find this bird in boreal forests, where the northern forest and tundra meet. They feed on plants, seeds, berries and spruce needles. Interestingly, the male sparrow attracts the mate by singing. It also defends its territory from attack by other birds. The average lifespan of Harris’s sparrow is 11 years in the wild.

Belonging to the New World Sparrow family, it is one of the most beautiful small brown birds. You can easily find this bird in the Canadian province. There are a total of 31 subspecies of Song Sparrow. As per the records, the oldest song Sparrow was around the age of 11. Their nests are mostly found in grassy tufts or shrubs. They feed on insects, caterpillars, beetles, grasshoppers et cetera.

It belongs to the new world sparrow family. Its uniqueness lies in the black and white streak on its head and the grey face and underparts. Their wings are brown in colour. When it comes to their size, they can grow up to 15-16cm in length with a total wingspan of 21-24cm. They weigh around 25-28g. Till now, the oldest White-crowned sparrow was around 14 years of age. They feed on seeds and grass. You will mostly find them in brushy habitats, hovering over branches as low as waist level.

These are the top 10 small brown birds in the world. Kindly share and do post your comments.