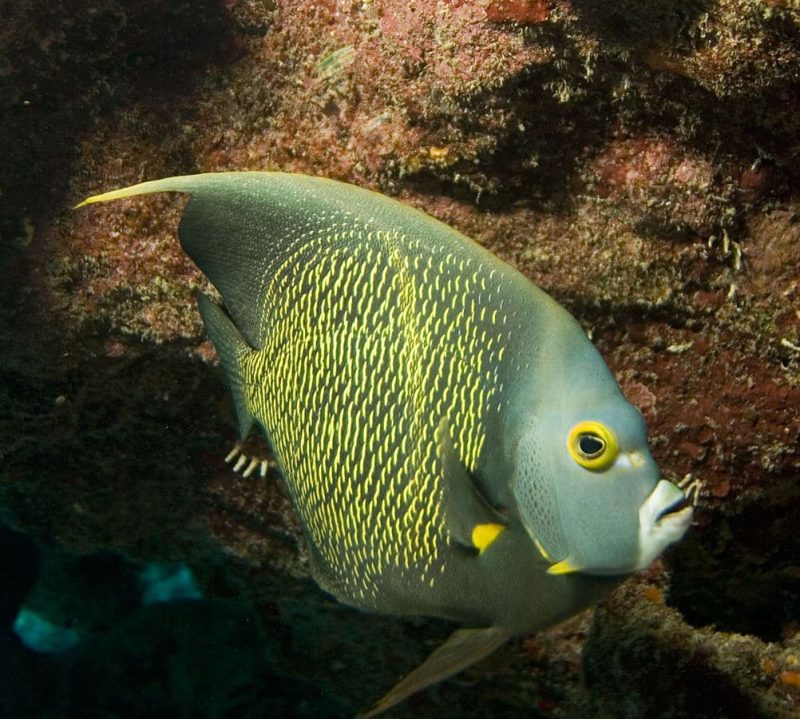 Beautiful Fishes are some of the most amazing Marine creatures found in vivid colors and cool patterns. There are many breathtaking fish species found across different parts of the world having distinctive characteristics, behavior, and habitation. There are thousands of majestic fish species living mainly in the Indo Pacific region, Indian Ocean, the Red Sea, The Great barrier reef, etc. So, here is a list of the top 16 most beautiful fish species found across the world.

MandarinFish is mainly native to the Indo Pacific region, the Majestic Mandarin fish is bluish-green in color with orange Linings. It is the most colorful and attractive fish species that mainly live in lagoons and Coral reefs. The Mandarin fish species is characterized by its vivid colors and beautiful patterns. Also, MandarinFish has a lifespan of about 15 years and is one of the most preferred aquarium fishes in the world. Also, it is a very active fish species and makes Rapid movements in the water. It is one of the most graceful animals in the world.

With more than 20 different species of clownfish found across the world, it is one of the most attractive and colorful fish species in the world. Most commonly found in coral reefs, clownfishes have an attractive orange color body with three brighter distinctive White bars. Also, they are famous for making quick and attractive moments in the water while swimming. However, this majestic fish species mainly live in the warm waters of the Indian Ocean in sea anemones. These are shy species and are often found hidden inside the sea anemones.

Also Read: 10 Types of Guppy In The World

Rated as one of the most preferred aquarium fish in the world Banggai cardinalfish is mainly native to the majestic Islands of Indonesia and inhabits the shallow waters across the island. This majestic fish species has a beautiful pattern of black and white bars but is very small in size and measures only about 8 cm in length. They are mainly found in habitats in shallow habitats such as coral reefs and seagrass beds. However, today they have become endangered due to the aquarium trade.

Blue face Angelfishes are mainly native to the Indo-Pacific region and are the most colorful members of the angelfish family. As the name suggests, blue Angelfish has a deep blue color face and the body is light yellow and blue in color. It has a lifespan of about 10 years and mainly feeds on shrimps, Marine algae, and Squids. Also, it is one of the most lovable aquarium fish because of its non-aggressive and peaceful behavior. Moreover, they are commonly seen in the coral reefs of Maldives, Malaysia, Indonesia other South Asian countries.

Moorish Idol is commonly found in Japan, South Africa, the Indian Ocean, Hawaii, etc.. this majestic fish species mainly lives in tropical and subtropical coral reefs spending its time mostly on the surface of the ocean. It is a beautiful fish species and is also one of the smallest aquarium fishes and have special yellow and black ribbons over their body. Also, it is a social fish species often found in groups of large numbers. The fish has been named after the Moors in Africa, who believe the fish to be a bringer of happiness.

Lion Fish is a majestic fish species known all over the world for its unique features as it has long red and white strips. Mainly native to the Indo-Pacific region, this Majestic fish species demonstrate the strips of a lion that makes them most attractive. But this fish species is quite poisonous and can harm human beings. Also, it is used as an aquarium fish in many countries. However, it is most commonly seen around the edges of coral reefs and also found in lagoons and Rocky surfaces of the ocean.

Also known as the Royal Angelfish, the majestic regal angelfish is a beautiful fish species found in the Red Sea and the Indian Ocean. It is a multicolor fish species with bands of blue-white and orange all over its body along with black and yellow caudal fin. Growing up to 25 cm in length inhabits mainly the coral reefs and lagoons that have abundant coral growth and are commonly found in near caves and ledges. Also, it is one of the most beloved marine and reef aquarium fish species.

Growing up to 50 cm in length, clown triggerfish is known for their vibrant colors and leopard-like pattern, and white spots all over their body. These majestic fish species are commonly found in tropical and subtropical waters of the Indian Ocean and are often seen in clear Water along the slopes. It is also known as big spotted triggerfish and has a dramatic coloration that makes it one of the most preferred aquarium fish species. The distinguishing feature of this fish species is that they feed upon crustaceans and mollusks by crushing them with powerful teeth.

Rated as one of the most beautiful fish species in the world, Rusty Parrotfish is known all over the world for its bright colors and fantastic patterns. It is commonly found on the coral reefs in the Red Sea, the Persian Gulf, and the Gulf of Aden. It has a bluish-green body with some light and dark brown bands and a yellowtail. It is a species of marine ray-finned fish and is most commonly found in groups.

Also Read: 10 Types of Fish in the World

Regal tang is a royal blue color majestic fish species with a black pattern and yellowfin. Also, it is a famous fish species known all over the world for its main characters in the Disney movie Finding Nemo. Regal tang is majestic fish species and is commonly found in the reefs around the Philippines, Indonesia, Japan, The Great barrier reef in Australia, etc. Regal tang fish is also one of the most common and most popular marine aquariums fishes found all over the world. They are also known by other names like Pacific blue Tang, Palette Surgeonfish, etc.

The Siamese fighting fish scientifically known as Betta splendens is a freshwater fish native to Southeast Asia and mostly seen in the regions of Cambodia, Laos, Myanmar, Malaysia, Indonesia, Thailand, and Vietnam. It is commonly known as betta and belived to have been domesticated for around 1,000 years which is belived to have one of the largest among fishes. It can grow upto 6–8 cm in length and is listed as one of the beautiful fishes because of its brilliant colors combination of green, brown, and grey.

Ghost Pipefish is also known for various names such as false pipefishes and tube mouth fishes. The species love to thrive in the tropical waters of the Indo-Pacific. These animal species are not larger than 15 centimeters (5.9 in) and float remaining motionless with the mouth in a downward direction. It primarily feeds on crustaceans and other plankton with the help of tube-like snouts. The different species of these fishes will live upto two, three, or four years or even more in marine life.

The emperor angelfish scientifically known as Pomacanthus imperator is a species of marine angelfish native to the Indian and Pacific oceans. One of the most beautiful fishes in the world is omnivorous in nature and seen eating both small invertebrates and plants. There are instances where it prefers sponges and algae. The fish species can grow upto 15 inches long. According to the researchers, there are no primary predators noted for the fish species, however, larger fish species such as sharks used to prey on these fish.

Candy Basslet is mostly seen in the regions of the USA to the Bahamas and northern South America. It can grow upto 6cm (2.4″) in size and prefers tropical waters in the ocean. The feeding habits are meaty foods in small amounts several times a day. The lifespan depends on how the fish is kept and it varies between 3 months to 15 years.

Picasso Triggerfish scientifically known as Rhinecanthus aculeatus is one of the beautiful fishes that comes in various colors such as blue, white, brown, yellow, and black. The avarage lifespan of fish species is 10 years in the wild. Nature is aggressive in nature and it can reach a maximum size of upto 10 inches. It is also known for different names such as humu-Humu, lagoon triggerfish, and piccasofish. The fish species were mostly seen in the waters of the Indo-pacific ocean and the red sea.

French Angelfish saw in the regions of the Indian Ocean, Western Pacific Ocean, and the Amazon Basin. It can grow upto 16 to 24 inches in length and weighs around 0 to 2 lb. The fish species are scientifically known as Pomacanthus paru and generally prey on Invertebrates. Talking about the appearance, it comes with a black body with bright yellow bands. The avarage lifespan of the species is 10 to 15 years in the wild.