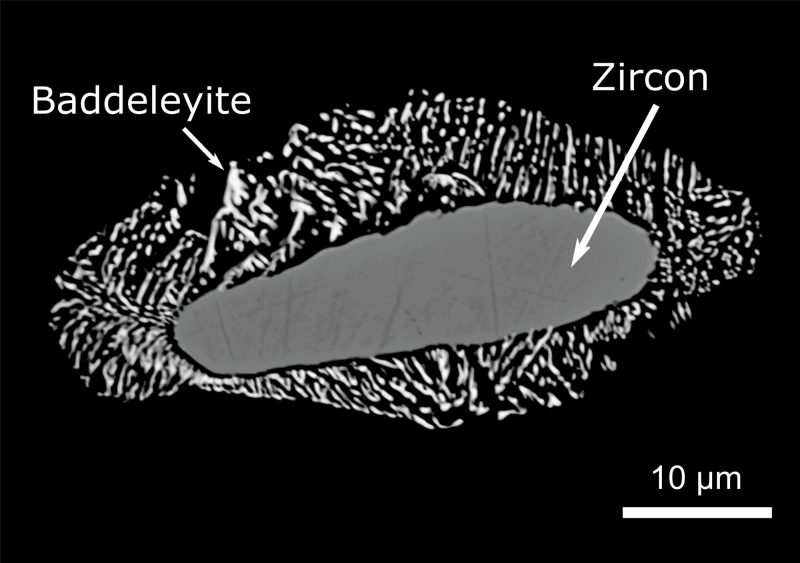 The University of Western Ontario has said the rock found in 2011, which was then called the hottest rock on the planet, has been confirmed to be the hottest indeed. A recent study found four additional zircon grains in the rock that confirmed the rock’s record-high temperature of 2,370°C. That rock was formed as a result of an asteroid impact.

The study, published in the journal Earth and Planetary Science Letters, was led by Earth sciences post-doctoral student Gavin Tolometti and co-authors: Timmons Erickson from NASA Johnson Space Center, Gordon Osinski and Catherine Neish from the department of Earth sciences; and Cayron Cyril from the Laboratory of Thermomechanical Metallurgy.

In 2011, then Ph.D. student Michael Zanetti was working with Osinski at the Mistastin Lake impact crater in Labrador when he found a glass rock that contained small zircon grains frozen inside it. That rock was later analyzed and found to have been formed at 2,370 C temperature as a result of an asteroid impact. These findings were shared in a study published in 2017.

In their own study using samples collected between 2009 and 2011, Tolometti and his colleagues were able to find four additional zircon grains that confirmed the 2011 discovery to be true. The researchers also located and found evidence in a different location within the same impact structure that the melt rock – rocks created after rock and soil melt into liquid after a meteor strikes – was differently superheated in more than one location, to a greater degree than previously theorized.

“The biggest implication is that we are getting a much better idea of how hot these impacts melt rocks are, which initially formed when the meteorite struck the surface, and it gives us a much better idea of the history of the melt and how it cooled in this particular crater,” Tolometti said.

“It can also give us the insight to study the temperature and melts in other impact craters.”

Tolometti also noted that most of the preserved evidence, such as glass samples and impact melt samples, were found close to the crater floor. By applying this knowledge to other impact craters, researchers might be able to find more evidence of the temperature conditions found in other craters but in less extensive studies.

“We’re starting to realize that if we’re wanting to find evidence of temperatures this high, we need to look at specific regions instead of randomly selecting across an entire crater,” he said.

The paper also noted this is the first time reidites – a mineral formed when zircon undergoes high pressure and temperatures – have been discovered at this site. The team found three reidites that were still preserved in the zircon grains, and evidence that another two were once present but had crystallized when temperatures had exceeded 1,200 C, at which point the reidite was no longer stable.

“Considering how big the reidite was in our samples, we knew the minimum pressure it probably recorded was about 30 gigapascals. But since there is a lot of reidites still present within some of these grains, we know that it could even be above 40 gigapascals,” Tolometti explained.

This provides a better idea of the amount of pressure produced outside of the melting zone when the meteorite struck the surface. The melting zone will, by default, have pressures usually above 100 gigapascals, at which point a rock will completely melt or vaporize outside of those conditions.

The research group plans to expand this work to other impact craters on Earth. Some Ph.D. students will be working with Osinski to look at other craters such as Lac Wiyâshâkimî (Clearwater West crater) in Quebec. Tolometti is also looking to expand this work and look at Apollo lunar samples that were brought back to Earth, which have plenty of evidence to form from impact craters.

“If we were to find evidence of microstructures in zircon grains or other grains in pressure conditions, we could get a much better idea of what impact cratering processes are like on the moon,” he said.

“It can be a step forward to try and understand how rocks have been modified by impact cratering across the entire solar system. This data can then be applied into impact models to improve the results that we get.”