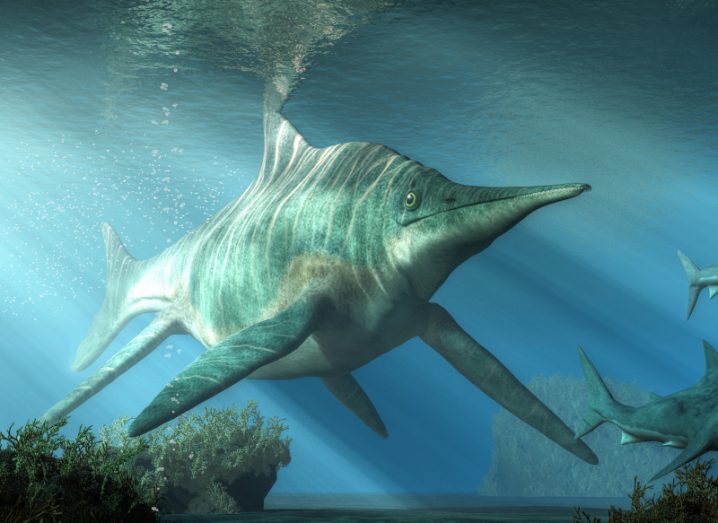 Paleontologists have discovered sets of fossils, unearthed in the Swiss Alps between 1976 and 1990, representing three new ichthyosaurs that may have been among the largest animals to have ever lived. The discovery includes the largest ichthyosaur tooth ever found. The tooth has a 2.4 inches wide base and an estimated length of 6 inches.

Fossils of some of the largest creatures to swim in Earth’s ancient oceans were found around 2,800 meters above sea level, high in the Swiss Alps. According to a newly published study, the fossils come from three different ichthyosaurs that lived about 205m years ago.

The first ichthyosaurs existed around 250m years ago during the early Triassic period. Before these marine reptiles went extinct around 200m years ago, they had evolved into gigantic forms that rival today’s sperm whales, reaching estimated lengths of 20 meters and weights of 80 tonnes.

The discovered fossils were first recovered by Dr. Heinz Furrer of the University of Zurich with students between 1976 and 1990 during geological mapping in the Kössen Formation.

The researchers believe that the rock layers with these fossils would have covered the seafloor 200m years ago. But the folding of the Alps caused the rocks to reach a much higher altitude over time. “Maybe there are more rests of the giant sea creatures hidden beneath the glaciers,” the lead author of the study Dr. Martin Sander said.

Sander noted that these prehistoric creatures have left very few fossils remains, the reason for which remains “a great mystery to this day”.

“It amounts to a major embarrassment for paleontology that we know so little about these giant ichthyosaurs despite the extraordinary size of their fossils,” Sander added. “We hope to rise to this challenge and find new and better fossils soon.”

The findings include rib and vertebrae fossils from two ichthyosaurs, which suggests these two individuals were roughly 20 and 15 meters in size respectively. The other “particularly exciting” fossil that was discovered was a tooth, which Sander said is “huge by ichthyosaur standards”. “Its root was 60mm in diameter – the largest specimen still in a complete skull to date was 20mm and came from an ichthyosaur that was nearly 18 meters long,” he added.

The size of the tooth raises the possibility that it could come from the longest ichthyosaur discovered to date. However, the team explained that it is unlikely the reptiles could have grown much larger than 20 meters, as research suggests that extreme gigantism is not compatible with a predatory lifestyle.