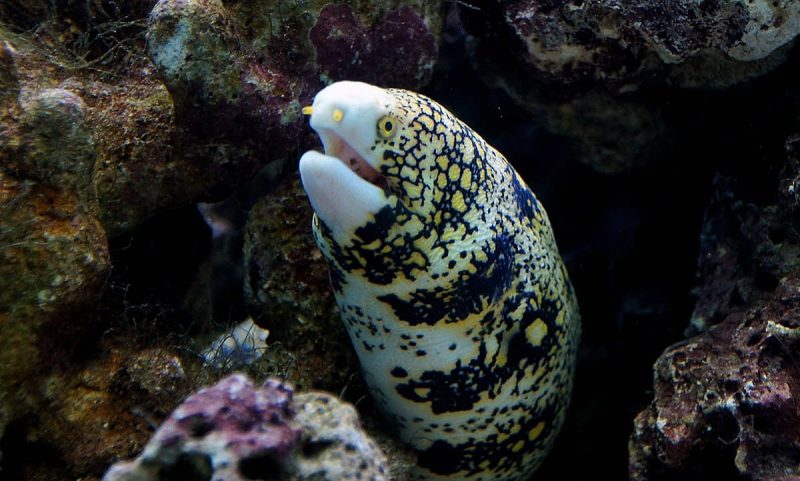 They are technically named Anarchias leucurus. They are mainly found in the Pacific Ocean. The common name Snyder’s Moray derives from the discoverer Snyder. However, a more apt name, by which they are sometimes referred to, is ‘fine spotted moray’ because of, well, the fine spots which are present all over their bodies. They are considered the shortest among all the eels as they barely reach a size of 4 inches. They prefer to live near the floors in subtropical waters, especially near reefs. They are mostly reddish-brown in colour though they show huge colour variations.

Also Read: 10 Different Types Of Crabs In The World

Obviously, they are named so because they are the largest of all moray eels. But in terms of weight only, not length. These fishes have brownish coloured skin with small patches of black. Like most eels, they live on floors of shallow reefs and in lagoons and estuaries. They prey on smaller fish and crustaceans. Their native region spreads from the waters of the Western Indian Ocean to the Islands in the Pacific Ocean. This species reaches up to a length of three meters in and weigh up to 30kg. Not a wonder then that they take on the most aggressive fishes in the ocean, like the Lionfish.

This is a slenderer version of the giant moray. These are longer than our previous eel, but they don’t compete with them in the largest by weight category. They prefer to live in benthic regions of bays and rivers and lagoons. The scientific name is Strophidon sathete and the common name also includes Gangetic moray.

This species can be found anywhere from the Indian ocean in the east to the Pacific in the west sometimes going as far as the western coast of the Americas. It is a saltwater fish that feeds mainly on smaller sea creatures that it finds. They are often a part of large aquariums (smaller ones can’t handle this beast) with other larger and more aggressive fish.

They are noted to be capable of escaping from the small holes in the aquariums although their size makes does not make it apparent. Do not try to hand feed this fish or you may suffer the same damage as they inflict on shrimps. Not a very pleasant experience.

Unlike most members of the Moray family, these eels are quite calm and do not attack aggressively. They are often a part of aquariums where they are quite popular because of their zebra-like skin patterns. They are not very long fishes, and their average size is only about 50 cm. Sometimes the stripes can be black similar to that of a zebra while other times they are brown in colour.

Because of their calm nature, they can live in an artificial aquarium with both aggressive and calm species. In the wild, their native region spreads across vast oceans going from the east coast of the Indian Ocean to as far as the Pacific coast of the Americas. They prefer to live in corals near the floor where the depths do not go higher than 50m.

Also called spot faced moray, these are nocturnal creatures who hide in crevices during the day and hunt in the dark. Its head has a distinct greenish-yellow colour while its body is whitish in colour with patches of dark colours. They also live in lagoons, reefs and estuaries at depths of around 50 meters. It is not considered to be harmful to humans generally.

These are deep-water fish with slim bodies with very thin fins. They are found in warm water regions of the oceans all across the world. They feed off the small creatures that live in such depths, like crustaceans and shrimps. They have a sharp mouth with teeth arrangement somewhat similar to humans.

Snipe eels live at great depths in almost all of the world’s oceans. The peculiar feature is the bird-like beak at the mouth. Their average length is 2 meters, and their weight seldom goes to a pound. They come in a variety of colours most common being sand brown.

One of the different types of eels found in the Indian Ocean and Western Pacific Ocean. They live solitary nocturnal life on reef floors and beds of lagoons and estuaries. Its main distinguishing feature is the greyish bands over its body which become visible when it is actions in the night. These are not very long or massive fish. They have a dark black line on the upper lip which renders them the common name Moustache eel. It is one of the longest living animals in the world.

No, you won’t find them lurking on the beach randomly although they do wash up on the shore sometimes. They are named so because they are found in waters close to beaches, in rocky places oftentimes. They prefer shallow waters in temperate climates of the Northwestern Pacific Ocean. They are scientifically called Conger japonicus identifying the regions they are found in. Not much information is available about this species. Like most members of this family, they too are carnivores and feed on fish and crabs. They are not thought to possess any harm to humans.

Contrary to what the name suggests these are not actual eels. The name was given perhaps due to misidentification on earlier encounters due to their similar appearance to eels. Not every serpent-like fish is an eel. The electric eel is a type of knife fish. It is one of the amazing types of eels in the world.

As has been popularised in movies and Jules Verne’s books they produce high currents that are capable enough to even kill animals as large as a cow! These creatures mostly live near the continent of South America and were thought to be the only member of their genus. Recently in 2019, two more species were found in this group and so they are not alone in the family.

These are the different types of eels in the world. Kindly share and do post your comments.