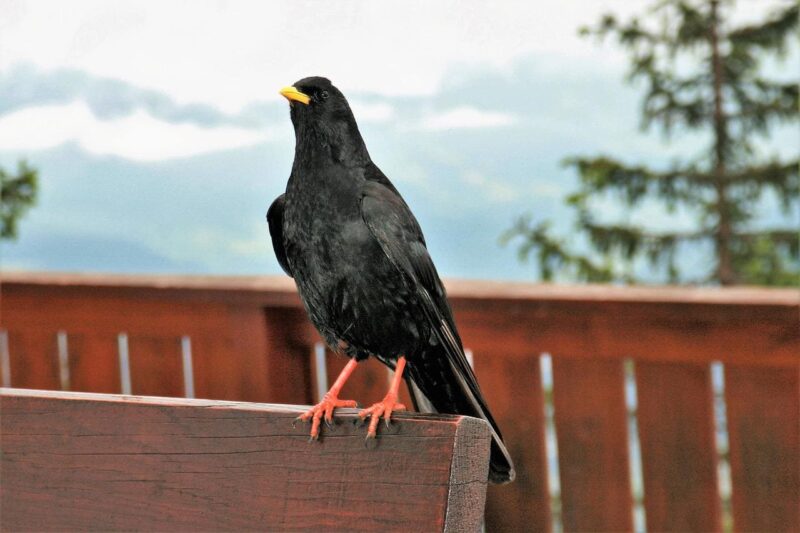 Do you think black and yellow are a good color combination? Or maybe you saw a bird with minimal colors, and you thought its fashion coincided with modern fashion. There are many birds that have minimalistic plumage colors and still killer looks. Read on to find out about 10 black birds with yellow beaks.

As the title mentions, this bird has a dark black body with a yellow beak. They are also called Alpine chough as they are found in the high mountains of Alpes. Their habitat is not limited to the Alps, however. They are also found in mountainous regions spreading from Europe all the way to the Himalayas. Their diet is also adapted to the terrain. In summer, they eat small insects and worms found in the pasture in nearby areas. In winter when they can’t find insects, they stick to fruits and seeds.

This is a broad family of birds that are found in South and Southeast Asia natively. All of them are black like a crow with a yellow-orange bill. Some mynahs also have yellow-colored bands or patches on the rear of the head. They are scientifically called Gracula religiosa and are also listed as one of the most amazing talking birds in the world. The latter name refers to the marvelous speaking abilities of the bird. They were taught to recite prayers and were popular with religious scholars.

The technical name of the species is Buteogallus anthracinus. The body size reaches up to 53 cm and the mass goes above a kilogram. In appearance, they have a total dark black plumage with yellow beaks and legs. There is also a narrow white band across the tail feathers. These types of hawks are primarily found in Central America. They stay close to the coasts near mangrove forests and estuaries. Their diet is also suited to such regions. They consume crabs and small animals and eggs.

These are famous birds with orange beaks from the forests of the Amazon. They have an unmistakable big yellow-orange bill with a black spot on the front. The toucans we are referring to are called Ramphastos toco scientifically. They are popular as small birds with long beaks and the common name giant toucan aptly describes their size among the toucan group. They are indeed the largest toucans among all and are also the most famous ones. Their diet consists of fruits which they pluck and peel using the bill. They also eat insects, frogs, small eggs, and reptiles.

This is a normal-sized bird of Iowa found in Europe, North America, and Asia. Due to human activities, they are now also introduced in places with suitable climates in South Africa, Australia, and Argentina. The scientific name is Sturnus vulgaris. This is a pretty common Missouri bird that is identifiable by its all-black plumage. with tiny spots of white all over the body.

They have a small yellow bill, and their legs are reddish-pink in color. They are omnivores and feed on insects as well as fruits, seeds, and nuts. They help in crop production when they fly in flocks and eat all the pests and increase the yield. Other times they themselves eat the crop and then farmers have to use control methods.

This is a water bird native to North America and the Caribbean. The scientific name of the species is Nannopterum auritum. They have webbed feet like ducks to help in swimming. The name comes describes the white feathers that grow above the eyes of an adult that is entering the breeding season.

The white feathers above the eyes are in stark contrast to the black color of the body. They are found in both fresh and seawater and their diet consists of aquatic animals like fish and frogs and crustaceans. The nests are built on trees or on cliff edges or sometimes on the ground when they are on the island and deem it safe.

Other common names are Pacific Sea eagle or White-shouldered eagle. It has a dark black-brown plumage all over its body except at the shoulders. The shoulders have a short lining of white feathers. One of the most beautiful eagle species comes in yellow-colored beaks and has yellow-colored legs with sharp black colored talons that it uses to catch and tear its prey.

The neck and upper legs also have some white feathers similar to the bald eagle. They are found on the Northeastern coasts of Asia in countries like Russia, Korea, Japan, and China. Being close to the sea, the preferred diet is fish. They are said to like salmon and trout. They are one of the largest eagles in the world known to catch fish sometimes weighing as much as 7 kg!

This is a member of the thrushes that are found across the world. But these are native to India and Sri Lanka only. They are further divided into five smaller subspecies all of whom are found in the sub-continent. They have most of the features similar to a thrush-like yellow beak, orange-yellow legs, and an eye-ring. They are mainly found in forests in hilly regions and prefer to stay clear of human activities.

Scientifically called Turdus flavipes. They have a pitch-black plumage over their body. As the name suggests, along with a yellow beak they also have yellow-colored legs and a ring of the same color around the eyes. The bright yellow color stands in striking contrast to the black color of the plumage and gives it a distinctive look.

The females have a dirty brown color of the plumage with a dull beak much as the young ones do. They are mainly found in the northern and southeastern parts of the continent of South America. They are shy birds and do not like coming down to the ground. They mostly feed on the tree on fruits and seeds and nuts.

Scientifically they are termed Melanitta Americana. You can now guess that they are found in the Americas. Specifically, they inhabit the coastal regions of the northeastern part of North America. They are also found in some remote areas of eastern Siberia near the Bering Strait and coastal Alaska.

Black scoters are ducks that live on seas. They feed on mollusks and crustaceans that they catch by diving straight into the sea. When on the coast they prefer insects and fish eggs and some plants too occasionally. They are highly social birds and live and fly in flocks.

These are the amazing black birds with yellow beaks in the world. Kindly share and do post your comments.