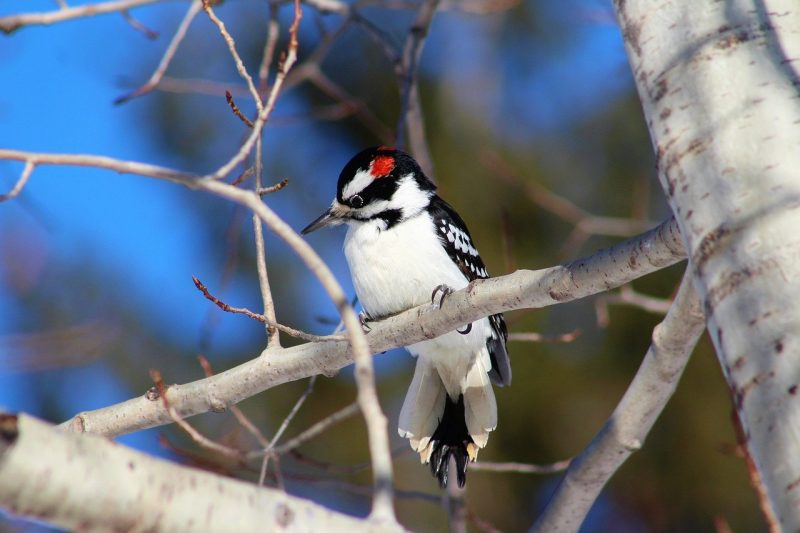 Woodpeckers are diligent birds belonging to the family Picidae. These birds are considered the “master carpenters of the bird kingdom” and are a keystone species, integral to the smooth functioning of the ecosystem. Woodpeckers drill into trees, primarily to find food, to nest, and to communicate with other members of their species. In doing so they also help control the local insect population and make nesting options available for other birds. These birds are protected legally under the Migratory Bird Treaty Act of 1918, which deems it illegal to kill them or capture them.

Pennsylvania, located in the Mid-Atlantic area in the northeastern part of the USA, boasts of about 2 million acres of forest districts and almost thirty thousand acres of national parks. Woodpeckers are a common sight in the state due to their favourable location- Lake Erie to the northwest, the Appalachian Mountains slicing through central Pennsylvania. The following is a list of the types of woodpeckers found in Pennsylvania.

The only distinct red on this woodpecker is on its head, unlike what the name suggests. Their bodies are pale and their bellies have an orange-red tinge to them. Red-Bellied Woodpeckers have a wingspan of 34 to 40 cm, measure about 24 cm in length, and have a zebra-patterned neck. They have a loud and distinct call by which they can be identified. These woodpeckers can be found all year round in wooded environments in the state. They feed on insects, nuts and fruits and have a habit of storing food through the summer, to have a steady supply of it during winter, as they do not prefer to move away from their nesting grounds. It is also one of the commonly seen woodpeckers in Florida.

The Downy Woodpecker is a small-sized woodpecker weighing 0.02kg, with a wingspan of 10 cm. Its entire body is covered in black and white feathers, and it has two black patches on its back, with the occasional white stripes and spots. It is the smallest variety of woodpecker or type of bird found in Pennsylvania. The diet of Downy Woodpeckers usually consists of insects, seeds, fruits, and nuts. These birds are found throughout the year in the state, mostly in deadwood trees in which they prefer to nest. It is also one of the commonly seen woodpeckers in Ohio.

The Hairy Woodpecker is a round-shaped, black and white bird that looks quite similar to the Downy Woodpecker, although it is larger in size than the latter by atleast a third. They are characterised as medium-sized woodpeckers with average wingspans ranging from 13 to 17 inches. Male and Female Hairy woodpeckers in colorado are almost identically black and white. However, can differentiate the males by the dash of red on their heads. These woodpeckers mostly feed on beetle larvae, ants, and bark beetles. They can be spotted throughout the year in wooded and swampy areas of the state. They are occasionally seen near beaver ponds, cemeteries and parks.

Pileated Woodpeckers are the second largest of all woodpeckers found in Michigan and North America. They are vibrantly coloured, with distinct red crests. These types of woodpeckers found in Arkansas have an impressive wingspan of 26 to 30 inches and prefer to live in secluded wooded regions. They feed on termites beetles and carpenter ants and often leave behind proof of their hunt in the form of rectangular holes hollowed out of trees. They are also known to eat fruit and nuts such as blackberries, sumac berries, dogwood, and elderberry. They are not commonly spotted in residential areas but are known to reside in the forested areas of Pennsylvania throughout the year.

Yellow-Bellied Sapsuckers are medium-sized woodpeckers with monochromatic feathers on their bodies and red patches on their head and throats. Their underbellies have a yellowish tint to them. These birds have a wingspan of upto 16 inches and an average life expectancy of seven years. They are known to feed on insects, fruits and tree sap. These are the only breed of woodpeckers on the list, which do not reside in Pennsylvania all year round. When in the state, they can be spotted in Young deciduous forests often on birch or maple trees, making sap wells to feed on.

Northern Flickers are small to medium-sized woodpeckers which can be found in Pennsylvania throughout the year. They have a wingspan of 54 cm and weigh about 120 grams. They are estimated to live upto nine years. What sets them apart from other breeds of woodpeckers are the beautiful brown shades covering their bodies, interspersed with black spots and their cream coloured chests. Their unique habit of foraging from the ground allows their diet to include ants, beetles, fruits and seeds. These birds are fairly easy to spot in residential areas, parks and along the edge of forests.

Red-Headed Woodpeckers are some of the most attractive birds in the world with their crimson-coloured head and bright white coloured underbelly. The black and white pattern on their wings gives them the moniker of “flying checkerboards”. They prefer to dwell in cavities of dead trees with easy access to food in the form of insects, fruits and seeds. Like the Red-Bellied Woodpecker, these birds also prefer to store food in tree cavities and cracks for steady supply in the winter.

One of the birds with red on the head has a wingspan of upto 43 cm and prefer to catch insects mid-air, instead of hunting for them in tree trunks. They can be found in Pennsylvania throughout the year, though some of their flocks migrate southwards in the winter. However, they are not easily spotted in residential areas and prefer to live in wooded areas and alongside forests.

These woodpeckers are very small, only about 9 cm in length with a black back, aiding their camouflage in nature. They have a wingspan of 40 cm, and have a white underbelly, with black and white stripes running down their sides. The males can be differentiated because of the yellow on their combs. They have three toes instead of the usual four found in most breeds of woodpeckers. They feed mostly on beetles, fruit, and nuts, and thus prefer to live in small deadwood trees in forests where this food is available in plenty.