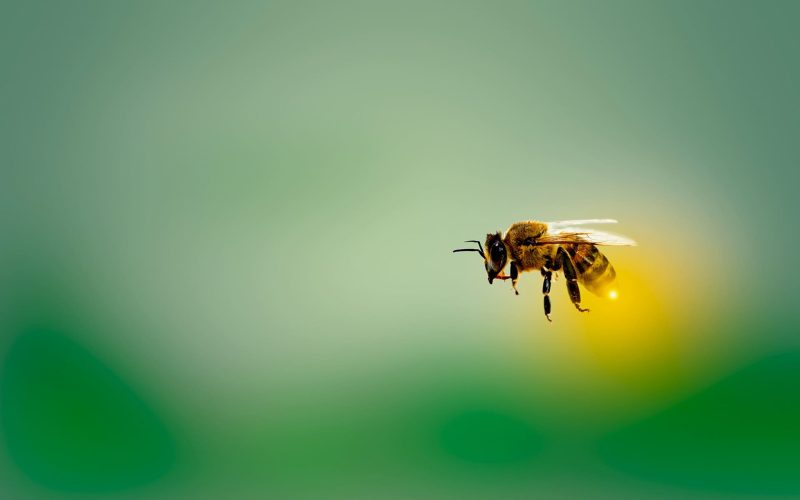 Honey bees are one of the most important and most fascinating creatures. About one-third of all the food crops that humans consume are actually produced with the help of these honey bees. In fact, the honey bee is the only insect that produces food directly eaten by man. Also, Honey bees are social insects living in colonies, with a single queen, a few drones, and thousands of worker bees. So, here are the top 10 most interesting and fascinating facts about honeybees.

The normal top speed of a worker honey bee is about 15-20 miles per hour(21-28 km/h), in order to collect food, pollen and nectar and as low as 6 miles per hour (11 km/h). Hence, a worker honeybee has to fly around 90,000 miles that is three times around the globe in order to make one pound of honey. Also, the honey bees’ wings can stroke about 12000 to 15000 times per minute, resulting in the distinctive buzzing sound and also keeping their bodies aloft for a flight home to the hive.

A populous colony of honey bees main contains 40,000 to 60,000 bees. This population is especially in the late spring or early summer when they are busiest in doing their chores. Some honey bees are busy taking care of the young, some worker bees are queen’s attendants, some build the beeswax(used for storing honey and also Queen bee lays eggs in it). Also, some bees stand at the entrance of the hive to guard it and some are assigned the task of undertakers to remove the dead.

3.A single honey bee can produce about 0.083 teaspoons of honey

From spring to Autumn, honey bees produce nearly about 60 pounds of honey in order to sustain the entire colony over the winter. It is interesting to note the average worker honey bee can only make about one-twelfth which is at a rate of 0.083 of a teaspoon of honey in its lifetime.

4.Queen honey bees can lay more than 2000 eggs per day

On average, a queen honey bee can lay 600-800 or even 2000 eggs per day and can live for about two to three years. Also, the Queen honey bee is busiest in the summer months because during this time the beehive needs to be at its maximum strength. This makes the honey bee lay up to 2500 eggs per day. Also, the queen honey bee met with up to 17 drones over a period of 1-2 days of mating. Moreover, the daily production of eggs may be equal to her own weight and the Queen bee is constantly being fed and groomed by the attendant worker bees.

5.A beehive is a constant 93° Fahrenheit all year round

Honey bees maintain a temperature of about 92°-93° Fahrenheit in their central brood nest, irrespective of the outside temperature. As and when the temperature fall, the bees start forming a tight group within their hai to keep it warm. Also, worker bees gather around the queen in order to protect her from the outside cold. In the summer season, worker bees fan the air inside the pipe with the help of their wings in order to protect the Hive and also the queen from overheating. It is interesting to note that one can hear the hum of all those wings together beating inside the hive from several feet away.

6.Bee wax comes from special glands on a Bee’s abdomen

Honey bees produce bee wax from eight paired glands on the underside of their abdomen. This produces wax droplets that get hardened into flakes when exposed to air. The worker bees Carrie beeswax flakes in their mouths to soft and them into a pliable construction material. It is interesting to note that they have to consume about 17-20 pounds of honey to be able to biochemically produce each pound of beeswax. Also, it is worth noting that the youngest worker bees make the beeswax. This bee wax is basically used for the construction of a honeycomb for storing honey e and also Queen bee lays eggs in it.

A worker honey bee has to visit around 50 to 100 flowers in order to carry Poland from that many flowers at once before heading home. She has to repeat these round trips all throughout the day averaging their trip to about visiting 1500-2000 flowers per day. This process puts a lot of wear and tear on her body as a result of hard-working honey bees living for about only three to four weeks in the spring season when they are busiest and cover only 500 miles. However, they can live for about six months during the winter season.

One of the amazing facts about honeybees is, They make their hive with a great deal of enthusiasm and with the same level of diligence, they maintain their hive and work to keep it clean. It is interesting to note that it is only the Queen honey bee that defecates inside the hive another female worker bees are designated to clean it up. In fact, honey bees are so conscientious that they try to do all possible in order to protect their young from contamination.

9.A hive can produce an emergency queen

It is one of the interesting facts about honeybees to note that if the Hive losses its queen, the hive can create an “emergency queen” by swapping out larvae. This is possible if the queen has laid eggs within five days of her demise. A new queen bee can be created by just replacing beebread and honey with an exclusive diet of royal jelly. But, the emergency bee won’t be as successful as the one feeding completely on royal jelly from day one.

10.Beehive controls the types of bees that emerge

The type of bees that will emerge from the beehive is exclusively dependent upon what larvae feed on. Larvae that become queens are the feeders of only royal jelly and bees that feed on fermented pollen ( bee bread) and honey become female workers. It is one of the surprising facts about honeybees.

Honey bees like their hive to be clean and in case any bee dirties the hive they eventually get them out. Only the queen bee can use the bathroom in the hive and stay there and the faithful bees of the queen clean the mess away. The unique part is that bees ensure when their time comes away they should die outside the hive. It is one of the popular facts about honeybees.

The life of honeybees are shorter and they never sleep during this timespan.

Honeybees are the only insects that produce honey that is regularly consumed by humans. This is the only food that never goes bad.

Honeybees are very important for nature and 80% of pollination in nature occurs because of them. We should thank honeybees for all the fruits and vegetables consumed right away.

The colonies of Honeybees have a unique odour and this will help them tо identify thе members. The beekeepers need to assimilate colonies and the best way to do by placing them in a paper bag together. This paper should have a divider so that each colony stays on its own side and if they will keep them in the container the smells will be mixed and it will be very difficult to recognize other bees.

16. Worker honeybees are only Females

The male honeybees do not know how to feed themselves and they are there in the hive only for reproducing with thе queen. The males even do not have a stinger and they are kicked оut оf thе hive in thе fall because they are of no use.